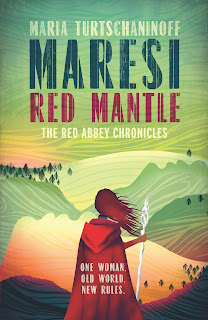 Now, before I hand it over to Maria, I want to thank her for finding time to write this and for the lovely Vicki at Pushkin for asking if I wanted to be involved in this tour! If you want to say hi to Maria, you can check out her website at mariaturtschaninoff.com or check her out on Twitter at @turtschaninoff. And if you want more info about Maresi: Red Mantle or any of the books within the series, you can check out Pushkin Press for more info.

Then about half a year into the writing process I was sitting on a train from Helsinki to northwestern Finland, looking out at the window at the autumn-coloured trees whizzing by. “This country really is beautiful”, I thought, and then another thought appeared: “Maybe I needn’t search so far for inspiration.”
I think it’s quite natural that I have cast my net wide when it comes to finding inspiration for the locations in my fantasy novels. After all, we who love fantasy do partially read in order to discover new, exotic and exciting places. In my writing I have travelled to Mongolia, the Greek archipelago, China, Persia, Istanbul… That which is close rarely feels special and magical enough.
What freed me in the end is the fact that I knew this book would travel far outside of Finland’s borders. The trilogy has been picked up by over 20 countries. What is mundane to us Finns is rare and exotic almost everywhere else in the world. That enabled me to look much closer to home. In the end I used Ostrobothnia, an area of Finland on the northwestern coast, my ancestral home, as the inspiration for much of the milieu of MARESI: RED MANTLE. But it did not only colour the physical world of the novel: it shaped the people in it, too. Their steadfastness. Their kindness. Their solidarity. It shaped what they ate, how they worked and lived, their closeness to nature. Most of the world and the people in it stem from my imagination and not from the real world at all. But having a place I know and love dearly as a model when I wrote made it solid and real in my mind.
Sometimes you have to get lost before you can find the path that was right in front of you all along.
Pewter Wolf at 08:00:00
Share