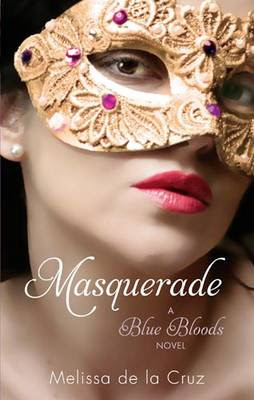 After reading the first in Blue Bloods series, I instantly jumped into the second “Masquerade” (which is rare for me. I find it difficult to read the same author two/three books in a row). And yes, due to what I said in the brackets, it did take me a while to read this. But that’s no fault of the story, nor the author. When I actually sat down and made time to read it, I flew through it (Sunday just gone, from chapter twenty-something to the end. Am quite pleased with myself.)

Before I go any further, I want to talk about the cover (the UK cover on show!). I love it. I think it’s one of my fave covers within the series so far (though this is having a small fight with the cover for book 3). But I have a small question over it. Who is on the cover? Is it meant to be Schuyler, Mimi or Bliss? Just a bit confused. Sorry. Had to ask.

Now, the story. It follows straight on after Blue Bloods within a matter of weeks and Schuyler Van Alen is in Venice, looking for her grandfather, a man she didn’t know existed till just mere moments before her grandmother’s death.

Meanwhile, back in New York City, “the cunning Mimi Force” (that what it says on the back cover of the book. And I TOTALLY agree with that!) is throwing a masquerade ball – which is exclusively for young Blue Bloods (aka the Young, Beautiful and Fanged).

Bliss is struggling to come to terms with the loss of Dylan and her blackouts and nightmares, which are slowly getting worse. So much so, that when she wakes up, she finds herself in places of extreme danger, like drowning in a lake in Central Park.

And the threat of the Silver Blood is rising. What will Schuyler have to do to make people believe that an old and deadly enemy is alive and preying of young Blue Bloods? And is she getting any closer to the truth to who the Silver Blood is…?

I do like the Blue Blood series and this book confirmed why I like it. It’s very much a guilty pleasure and it is very Gossip Girl. And yes, I still expect Kristen Bell’s voice to pop up, but to a lesser degree than when I read Blue Bloods.

Also, (I forgot to mention this in my Blue Bloods blog entry – whoops!) I like how, ever now and then, at the end of a chapter, something pops up which, at first, has no importance to the plot but then someone mentions it near the end and you go “Oh!”. In Blue Bloods, it was entries from a diary from a young woman onboard the Mayflower. In Masquerade, it’s mostly newspaper clippings about a young heiress going missing.

A guilty pleasure of a fast read, I do like this series! If you like Twilight and/or Gossip Girl, this is your book fix you need!

Now, onto book three in the series, Revelations, I go (and the audiobook version of the Prophecy of the Sisters by Michelle Zink – but which one will I be reviewing next…?)

LAST MINUTE ADD ON! I mentioned on Twitter about the Blue Blood series is turning into my guilty pleasure of the year and I got two replies that got me very happy. One was from the UK Publisher, Atom Books (who rocks!). The other - from Melissa De La Cruz - that's right! THE AUTHOR HERSELF!!! (why yes, I am a little in shock!)

@AtomBooks @PewterWolf13 Don't feel guilty about your love of @MelissadelaCruz. It's good to indulge, especially when the treat comes from Atom towers!

@MelissadelaCruz I'm ALL about guilty pleasures. But why the guilt? I just believe in pleasure. RT @atombooks @pewterwolf13 MDLC is guilty pleasure of year

And because of that, I'm going to put two videos up. One that I kept hearing in my head while reading Blue Bloods and the other that I played all the time while I was in New York...


(is it me, or do the Darlings from "Dirty Sexy Money" remind anyone of the Forces? Anyone? Or is it just me?)