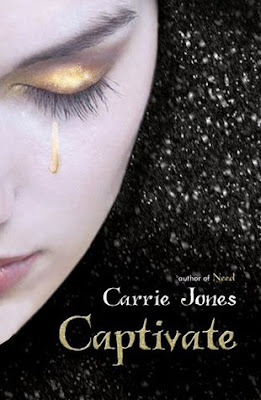 In less of a week of finishing the audiobook of NEED by Carrie Jones, I finished the sequel CAPTIVATE this morning (I had yesterday off work so I had a massive sit down and listen to it while I was trying to write. Weird, I know, but it sometimes works with me!) and am reporting back about the book and everything!

Zara and her friends knew that they didn't stop the Pixie problem (oops! and I kept it quiet in last blog - click here to read), but only delayed it. But, only weeks have past when things slowly get out of control. Two Pixie Kings are coming into the area: one evil, and the other, Astley, who is saying he's one of the good guys - hard to believe seeing as nearly every pixie Zara and her friends has met has been ... well, evil. But Zara wants to believe Astley - which is fine, expect Astley believe he and Zara are meant to be together and Zara is in love with Nick.

But events happen that shake Zara to her core and soon, she has to put everything on the line. Nick's life, and her own.

Okay, am going to be honest, I had a problem with this book. I don;t know why I had a problem with it. I just did. I think that it's my own doing. First, I listened to NEED and CAPTIVATE back to back - something I rarely/hardy ever do. And second, I listen to NEED as a standalone novel, not as a series. I read it how I read SABRIEL by Garth Nix. That was a standalone novel, before Garth Nix wrote LIRAEL and ABHORSEN.

But that doesn't stop me liking the story. It's a Me Thing.

Now, the story. I really liked it. It was a worthy sequel - it's doesn't suffer from "Second Book Syndrome" (there is going to be a third book entitled ENTICE. There might be a fourth, according to the author's - Carrie Jones - website). But it is a sequel so you will need to read NEED before you read this.

I don't what else to tell you. I fearing that if I keep going, I will put spoilers in and I HATE spoilers! So, am going to keep this vague and leave you with teaser trailers for both NEED and CAPTIVATE (and with a song that I think fits the book CAPTIVATE. Maybe two...)

STAY SAFE FROM THE PIXIES!!!

(OH! The songs used in the above two adverts is "Stay or Leave" and "Couldn't Be More", both by Derek Daisey - click out his mySpace for a listen of the songs)