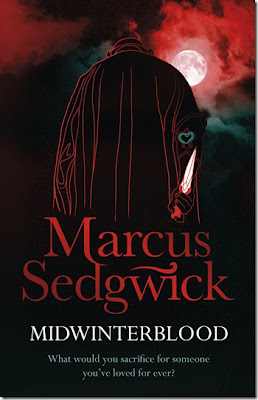 As you guys know, I went to the Indigo Launch Party a few months ago (if you haven't read it, click here). And after trying to find time to read them (I now sense I am going to do a huge Indigo read this November...) and failing as I read The Near Witch & Hourglass (both reviews will come in the next few weeks, FYI), I decide to grab one and read it. So, onto Twitter, I asked which book to read (I gave four or five choices) and MIDWINTERBLOOD came out the winner. I think the reason for that was I had a copy of that as a ringer-binder.

Midwinterblood. Where to start on explain this strange book...? Do you ever get the feeling you've lived a life once before? Or the feeling you've met someone before but never have? With Eric, he has that feeling. It's 2073 and Eric has arrived at Blessed Island where he meets, and falls in love with, Melee. But he has the feeling that they have meet before in a previous life... Through seven parts from seven different times, we see that it might be possible. But why is the past so important? Why is the past effecting Eric and Melee's future?

Now, I have to tell you something. Something that most book bloggers out there will be shocked over. I have never read a Marcus Sedgwick book. I know of him and I've always been intrigued but I always thought of him as Horror. And seeing as I'm not a horror person, I usually stay away... 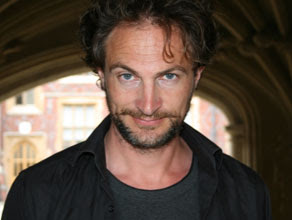 So, when I got this for Indigo, I got quite excited but held this at a distance. And now I can say am a bit miffed with myself for not reading him sooner. It was dark, creepy, unafraid to be "grown-up" at times and, at several points, a completely mindf***. It was almost like a crime novel. You got the beginning but, as you go through the book (and through time), you began to figure things out. You saw the layers and that was interesting to suddenly go "No way!" and figure out the clues.

This novel was inspired by the painting "Midvinterblod" by Carl Larsson and after finishing the story and then going online to see it, I can see why. I like how Marcus got from this painting to the story and all it's parts (I very much like parts 2, 5 and 6. Not going to tell you what they are called - don't want to spoil it for you!).

But this is a dark, creepy novel with layers. I wish I discovered Marcus Sedgwick sooner...