GoodRead - The Assassination of Margaret Thatcher 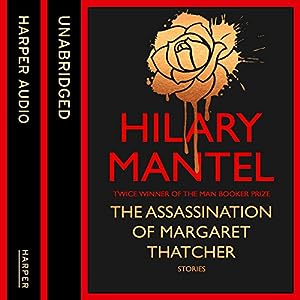 The lovely Fliss from Midas PR asked me a few weeks back if there was any audiobooks on Audible.co.uk that I would like to listen to for review. Two audiobooks caught my eye and, on a whim, asked if I could review them. The first was A Slip of the Keyboard by Terry Pratchett and the second was The Assassination of Margaret Thatcher by Hilary Mantel.

Both of these caught my eye as both authors I know very little about, both books were in genres I don't normally read in (Terry Pratchett is a collection of non-fiction essays while Hilary Mantel is a collection of short stories) and I wanted to read something grown up. Something completely outside my comfort reading zone. And Fliss very kindly gave me audiobook copies of both these (so thank you Fliss). I shall starting listening to A Slip of the Keyboard in a few days time but I wanted to dive straight into this one because of all the drama surrounding this book.

My thoughts of this collection... well... I'm disappointed and frustrated. Which is really sad as I really wanted to like this. I was really excited to start listening to this collection, but as each story went on, I found myself getting frustrated and, at times, quite angry at the stories.

I felt that, with each story, it had an interesting idea. However, the execution of each story always missed the mark. Plus, each story felt like it needed more pages or, in the case of The Assassination of Margaret Thatcher, a page or two less.

Another problem I had was the audiobook read, Jane Carr. I never warmed to her voice. There were times, I felt the urge to turn the audiobook off because the way she read the story really annoyed me.

One huge problem I had was how certain issues were tackled. In one short story, The Heart Fails Without Warning, a sensitive issue was tackled but, in my opinion, it was tackled with the respect or care it deserved. Instead, it was tackled quite harshly and it felt to me that this story was written by the author, not because she wanted to raise awareness about it, but because she wanted to show that she could write a shocking moment in a extremely shocking way. It felt, dare I say it, as if she wrote it to boost her writing ego.

I have recorded a review of this on the BookishBrits channel, which I hope will air in the near future, in which I try to understand my reactions and feelings towards this, but this wasn't for me. I know there are people out there who will love this collection of short stories but, sadly, this collection wasn't for me and I think I might not try Hilary Mantel again for quite a while...
Posted by Pewter Wolf at 16:24:00