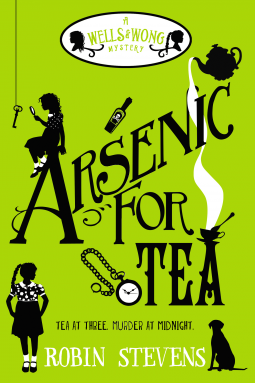 I haven't read the first book in the Wells and Wong series, Murder Most Unladylike. Before you say anything, I know... I know. I am a bad UKYA blogger. This is one of those books that everyone in the blogsphere LOVES and I do have a signed copy (thank you, Foyles!) on my TBR shelf, but when I saw Arsenic for Tea, I wanted to read it. Plus, I wanted to know if I could read Arsenic for Tea without reading Murder Most Unladylike...

Best friends Daisy Wells and Hazel Wong solved one murder. But can they solve other? When they go to Daisy's home, Fallingford, for the Easter break, they should be celebrating Daisy's birthday. Expect that's not the case - so Daisy is naturally annoyed. A mystery man has appeared and his arrival upsets the balance of the household.

And when he suddenly becomes ill and then dies, everyone close to Daisy is a suspect. And when the clues point to one person in particular, the Detective Society have to discover who the killer is - no matter the consequence...

As you guys know, I do like a good murder mystery and this was delicious reading. It was as if someone had dared Agatha Christie to write an Enid Blyton story and this was the end result. A story that was fun and addictive read, strong leads (I like Hazel a lot, but Daisy is a tad spoilt for my taste but I think she's meant to be!) and a mystery that leaves you guessing till the very end.

What is interesting about this book is, because of the time this series is set - the 1930s - we see things that I think people who like to brush over. There is hints of casual racism aimed at Hazel - racism from people who are "nice" - and we see that this upsets Hazel, but it's still unnerving to see this and go "People used to think this was accepted". Am very happy that Robin Stevens tackles this and doesn't shy away from Hazel's reaction and her feeling alone. It was a fun read, though I do think you should read Murder Most Unladylike before as the events of book 1 were mentioned.

I do think some of you guys will think this is a bit young - it could be classed as a middle grade book rather than a YA read - but it was fun! A fun read and a good crime read (which is bad as I want to attack all the Kathy Reichs I own!), but I can't wait to read Murder Most Unladylike as soon as I find time so I am up to date when book 3 in this series, First Class Murder, comes out at the end of July of this year...
Posted by Pewter Wolf at 21:37:00