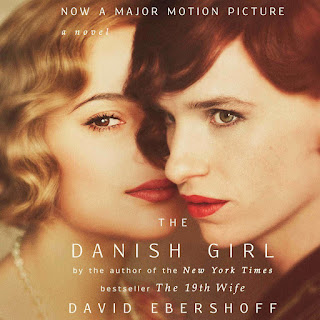 When Leanne from Midas PR asked last month if there were any new audiobooks that catch my eye, I discovered that The Danish Girl (the movie stars Eddie Redmayne) is based on a book, I asked if I could listen to this. Plus, I like challenging myself with audiobooks. I like trying to take risks with audiobooks and the stories they tell.

Based very loosely on the lives of danish artists, Lili Elbe and Gerda Wegener. It looks at a marriage and the story of Lili, pioneer in transgender history.

Now, I am going to admit that I struggled while writing this write-up. Its hard to put into words my feelings over this as, while I believe the story is interesting and important, I have equal feeling towards it that it annoyed me and the story missed the point.

I have read other reviews and I know I am one of the few int he minority, but I am going to be honest about my thoughts and feelings about this.

There were elements of the writing that reminded me of The Hours by Michael Cunningham. I can't put my finger on why I kept drawing comparisons between the two, but my mind kept going there. And there were moments where words and lines just flowed.

However, I struggled with this at times too. There were times, I found the writing and the way the narrator read the story hard work and, on two or three occasions, I considered quitting. It felt like hard work to like the characters when the story was doing no favours for them.

But my biggest issue, the thing I had the most problems over, was how the issue of transgender was handled. I completely understand why the author wrote Lili and Einar as separate characters - but I fear some readers will struggle with this. But my biggest things was how this was handled. It was written in a way that, I fear, would make the reader feel that, instead of reading a book about a person who is transgender, they are reading a character who is suffering from a mental health issue, such a split personality disorder.

And I say this because there was one or two times, I felt like I wasn't reading someone who was transgender and I was going "Nononono!" over how this was handled. I wasn't happy over it!

I do want to watch the movie when it comes out on DVD so my opinion might change. But I wasn't a fan of this story, and I believe the movie might tell this story better.
Posted by Pewter Wolf at 17:00:00