Audiobook #re3 - Alice's Adventures in Wonderland 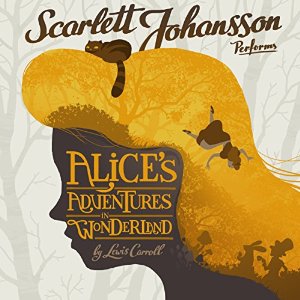 As you guys probably know if you have been reading the blog for a while, I have actually read Alice's Adventures in Wonderland not once, but twice. The first was back in 2010 and was an abridged version of the book (I know, there are abridged versions of books!) and the second was in 2013 and that was full of grammar mistakes. Oh, so many grammar mistakes/errors!

So when Leanne from Midas PR emailed me if I wanted to listen to Scarlett Johansson's reading of Alice's Adventures in Wonderland, I said I would once I caught up with my audiobooks. And now that I have, I have downloaded, listened and am going to talk about the story and Scarlett's reading of this tale.

I think we all know the story of Alice in Wonderland. Alice falls down a rabbit hole chasing a White Rabbit. She falls into a world where she has tea with the March Hare and the Mad Hatter, playing croquet with the Queen of Hearts, meeting the Caterpillar and talking to (my fave character!) the Cheshire Cat.

As you guys are probably aware, i have very mixed feelings on this. If I had read this as a child, I would be obsessed with this story and the world (hence my love for Disney and any other version I can watch). But as an adult... well, it's really surreal. There's not much plot - but that's the point. This is a story of a young girl have a dream of a world that makes no sense. Dream logic and all.

So, Scarlett Johansson's reading of this tale. I have two feelings on this. Once I found my footing with Scarlett's voice and got use to how she read, I found myself enjoying it. It flowed and Scarlett has a voice I could listen to.

However, there were times I found her reading jarring. There were a few times Scarlett reading made me feel like she was a school governess. It was so strict and straight-laced. And I wonder at times, if it's because Alice's Adventures in Wonderland is such a British story and Scarlett is American that maybe this was the wrong story for her to narrate. I can't help but wonder if The Wonderful Wizard of Oz would have been a better choice (and if she does, I would very happily devour that! I believe Anna Hathaway has done an audiobook version of this so I will be investigating that!)...

It was a lovely reading and am intrigued over who Scarlett reads next...
Posted by Pewter Wolf at 16:00:00