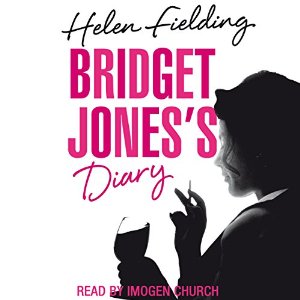 Confession to make time: I asked to review this back in September and the lovely people at Midas PR and Audible happily said yes. I asked if I could listen to this to celebrate the move release of Bridget Jones's Baby, but when I thought of my "Adult Literature Month", I knew I had to push this back and talk about it here.

This is Bridget Jones's diary. We see inside her head as she tackles modern day London, being a modern woman, her parents, relationships, career and everything else.

I have seen the movie (and from what I remembered, I enjoyed it) and I have audiobook Pride and Prejudice at the beginning of this year (Bridget could be seen as a modern-day reimagining of P&P) so going into this was interesting as I knew vaguely where the plot would go but wasn't sure where...

It is my honest belief (and I know this because I have tried to read a sampler of this and the sequel, Edge of Reason) that I couldn't and wouldn't have read this book and audiobooking it was a great help. I couldn't get my head round the writing style (I am not the biggest fan of books told in diary entries), but while it did take a while for me to warm to this style in audiobook form, once I got it, I got it. I think this is because of the reader, Imogen Church. She made Bridget seem more real to me and, even at times when I was frustrated with Bridget (will get there, hang on), Imogen made her likeable.

I liked the story. I liked how Bridget tried to figure out her life. I could relate to one or two things in it. And Bridget's entries made me smile. I didn't laugh at them, but I thought "I had something similar, but this is so heightened!" 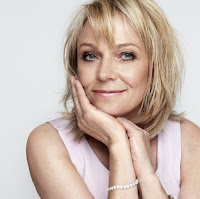 However, while I liked the story (fun, fluffy read), Bridget frustrated me to no end. She would write or say one thing then completely contradict herself a entry or two later. It annoyed me endlessly! For example, there was one point she talked about her weight and how she will never count calories again and enjoy life because after so many years of trying to get to the perfect size, she applies ill. And yet, she still carried on counting her calories. She talks about her being single is wonderful and great, only to whine about being single a few hours later. There were occasions I would question Bridget's stance on her feminism as she would say one thing, only to do something which contract it. And, at times, she comes across completely unlikable (the reader, Imogen Church, does a lot to save this character for me).

She's flawed and, while this is refreshing (how many times have we read characters that seem too perfect or have one tiny flaw?), there are other times I couldn't help but get angry at her.

While I liked this audiobook, I'm not sure if I want to continue with series (unless I get audiobook for Edge of Reason and have the same reader). But not sure if I would read it. This sits in the middle of the fence for me as some of you will enjoy and love Bridget, others not so much.
Posted by Pewter Wolf at 12:00:00