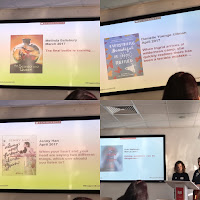 Yesterday, while most of you were on a Women's March (YES!!!), I was very kindly invited to Scholastic to hear about some of their future YA releases for this year. So, up early and into London a cold morning. After getting into London a bit earlier than expected (and snooping round quickly in Foyles) and meeting a few bloggers early for pre-Scholastic Cafe Nerro (hi Chouett, Dark Dictator and Reader's Corner), we went into Scholastic with a bunch of other bloggers and vloggers (and I had chance to say hi to a few - sorry. It's been a while since I been to a blogger event and... well... this is me we're talking about. Of course I was excitable and trying to contain it!).

Before the event started, we had to do a lucky dip from a goldfish bowl. And we told that if we pulled out a piece of paper with a goldfish drawn on it, we had won a signed copy of Goldfish Boy by Lisa Thompson. And I had a goldfish! I forgot to thank Lisa when I spoke to her later (more on why later!) but what a nice and unexpected start to the event!

The event was split into 4 sections: upcoming releases, two Scholastic panels about editorial and cover design, two more panels from authors (contemporary and fantasy) and a pop quiz about Fantastic Beasts (Scholastic is pushing a few of the movie tie-in books, hence the surprise pop quiz). 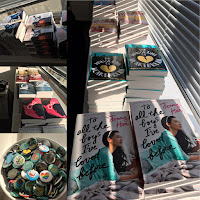 Now, I have made notes but my note taking is kinda bad. They are mostly one sentences. I will take photos and put them up on my Twitter/Instagram (I have an Instagram now! TOOK ME LONG ENOUGH!!!) so you can see the notes and the titles in questions. But am going to talk about a few as they stuck out the most with me and got me going "I need to read you!"

So, let's start with Goldfish Boy. This is getting a bit of hype already and somehow, it has completely missed me. This is a middle grade which follows Matthew who suffers from OCD, likes to live in his bedroom where it's safe and clean and watch his neighbours through his window. But when a toddler staying next door goes missing, Matthew is the last to see him. Because of this, Matthew feels responsible to finding the truth - and with every neighbour a suspect. But can Matthew figure it out what happened and overcome what's holding him back?

See How They Lie is Sue Wallman's second novel, following Lying About Last Summer. And it screams thriller. Hummingbird Creek is a wellness retreat where rich teens go to get help for their psychological problems. Mae feels lucky to live there with her dad being the Creek's prominent psychiatrist. But the Creek has rules, and Mae breaks the rules, the punishment is severe. Because of this, Mae can't help but ask questions about the Creek and her highly-controlled life. But asking questions at the Creek can be dangerous... This sounds right up my street! You guys know I love a good thriller and this just sounds perfectly edge of your seat reading! 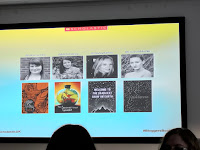 This next book I didn't know existed till this event but I want it as soon as I can. Noah Can't Even by Simon James Green is part coming of age story, and part coming out story. Noah just wants to survive school - that's not too much to ask. But when your mum is a Beyonce tribute act (and not a good one at that) and everyone at school finds out, let's say Noah's school days are hell. He thinks if he dates Sophie, he will have some normalcy, but when his best friend, Harry, kisses him at a party, his life goes into utter chaos. This sounds heartbreakingly funny and with a cover like that, I can not wait to get my hands on this and find out why, oh why, is there a banana on the cover!

The third and final book in the Sin Eater's Daughter trilogy, The Scarecrow Queen, is coming out in a few months time (and I still haven't read it! But not for long!!!). There's not much to say without completely spoiling the first two books but the stakes are high and the Sleeping Prince will stop at nothing to keep the throne forever. Brace yourselves, everyone, and fear for your fave characters...

Penultimate book to chat about is Show Stopper by Hayley Barker. Best way to describe this debut is imagine The Hunger Games set in a circus and up the blood factor. The poor are forced to sell their children to the travelling circus, the ruling class come to watch the bloodthirsty entertainment and the demonic ringmaster enjoys the cruelty. So when a son of a government minister comes to the circus and comes face-to-face with a young performer, they join come together to escape the circus and ed the brutal sport. Roll up, roll up! The circus is in town... 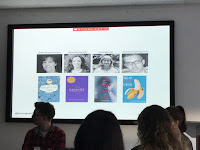 Final book to chat about is A Shiver of Snow and Sky by Lisa Lueddecke. Another debut (a lot of debuts on show yesterday), this is set on the frozen island of Skane, where the sky speaks in colour. And with each colour comes meaning. Green means all is well and the Goddess is pleased, blue means a snow storm is coming and red... red means danger. The last time the sky went red, Ósa was born and a plague claimed hundreds of lives from the village, include her mother. Now the sky is red again, and Ósa must find out what it means before more lives are taken...

Don't they sound yummy?! Other books sounded just as good, but the books I mentioned are very high on my TBR lists (plus, I have little to no notes on them! SORRY SCHOLASTIC!)

After that, we had panels. The first was about cover designs who chatted about creating the covers for The Goldfish Boy and Noah Can't Even. And they revealed Noah Can't Even in that moment. Now, you think as mature people in our late teens/20s/30s, we would be more collected and mature over our reaction to seeing the cover. NOPE! We saw the cover in stunned silence and then burst into laughter and clapped happily. YA book bloggers - we have the dirtiest minds in the blogging community!

We then had a small panel chatting to two editors and that was fascinating. But too shy to ask any questions (my questions would be stupid. Like "Why do editors use red pens?" or "When lightening strikes the sea, why don't all the fish die?")

We, then, had panels from the authors - one from contemporary authors and the other from fantasy authors. And after that, we had a Fantastic Beasts pop quiz and it went very serious. You have no idea how seriously we all took that quiz. Failure was not an opinion. Each team had an author (my team had Lisa Thompson and I feel sorry for her due to us getting out Potter game-on. Sorry Lisa if we overwhelmed you!) 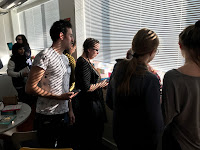 After that, a nice informal chat with the authors and each other, asking if we can take some books (we were. So I have a lot of series to start. Quite excited!), we left. It was a lovely event! Nice to meet old faces in the blogging community and make some new friends as well. And say hi to authors. So, thank you Scholastic for inviting me. Very kind of you.

Although, I have got into trouble. Before the event, was asked if I had read the Sin Eater's Daughter series yet (I said I would last year). And the answer was no. The gasps of horror, dear readers. I was told off and ordered to read them ASAP! When Scholastic offered us books, I firstly grabbed Sin Eater's Daughter and Sleeping Prince and was chatting to people that I needed to read them as Melinda Salisbury's books. And she heard, as I think I said this TO HER FACE! OH, WHY DIDN'T THE GROUND SWALLOW ME?! But Melinda was lovely. She didn't use her powers of darkness to hurt me. She just signed my copies and then "borrowed" my phone to Hogwarts Sort a blogger who didn't know her house (THE HORROR!!! She was sorted into Ravenclaw, much to my Hufflepuff and Melinda's Slytherin dismay!). She did write a threatening note in my books, though. But, I AM PLANNING TO BINGE READ these before Scarecrow Queen comes out. I tweeted it and everything so it's LAW now...

Always, heads up. I promised everyone (including @MESalisbury - TO HER FACE!) that will start SIN EATER'S DAUGHTER before end of month! pic.twitter.com/IF53MfWr40
— Andrew Hall (@PewterWolf13) January 21, 2017