It's so weird going back to this trilogy. I first read Northern Lights (or The Golden Compass, if you live in the USA) back when I was 16. It's been around 15 years since I first discovered this book. And this book was first published in 1995, making this book over 22 years old!!! CAN YOU BELIEVE THAT?! And I am going to try, since the year I first discovered this trilogy, to read all three books in one year (along with Garth Nix's The Old Kingdom trilogy... this year is going to be interesting. Stressful, book reading wise).

Because this is a reread/#re3, please be aware there are spoilers ahead. DO NOT CONTINUE IF YOU HAVEN'T READ THE SERIES, OK? This is why there is a page break here. Am trying to protect your unspoiled book eyes/minds... 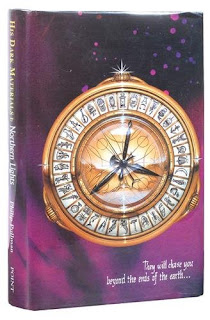 The first thing about this reread is that it took me OVER A MONTH to read. Yes, it wasn't my main read but I thought I would have flown through this. But I'm not sure if it was time-wise (been busy last few weeks so reading has been very hit and miss) or maybe it was because what I thought would be a quick reread turned into something completely different. I was reading this as details and things I misremembered came back either earlier in the book or earlier in the series.

A good example is when Lyra finds out who Lord Asriel and Mrs Coulter really are to our main character, Lyra. Lord Asriel being her father and Mrs Coulter being her mother. It comes a lot sooner than I remembered. I thought it would be much, much later. Very close to the end. But it's told by John Faa very early on. Because of this, I had to slow my reading down as I have forgotten or misremembered a lot! Plus, because of this information reveal, it changed several things in my head about Lord Asriel as a character.

Now, I knew Mrs Coulter is a very complex, a very mortally grey character, but I forgot how much Lord Asriel is exactly the same. In the very chapter, he discovers Lyra hiding in the room and, rather than thanking her for saving his life (the wine he was about to drink was poisoned), he threatened to break her arm. Though Lyra sees him as a dark, brooding character, this doesn't feel out of place for her uncle to say to her. But reading this line again, knowing Lord Asriel is Lyra's father, it takes a darker meaning. It's more frightening. And what's more scary about this line is, after reading this book and seeing what he does (poor Roger!), we know that he would very easily do it and not give it a moment's thought.

He doesn't act like a father figure, and yet, we are blinded because, when Lyra is told who her father and mother are, she instantly thinks of Lord Asriel as her father, but she doesn't do the same to Mrs Coulter.

Mrs Coulter is an interesting character. She's a complex character. A bit like Umbridge in the Harry Potter series. Both are very complex, very grey (almost in the black in their acts), but you can't stop reading them. She is power-hungry, dangerous, smart, ruthless and yet, there's something there. She wants to be a mother figure to Lyra.

But also, at the same time, I wonder about Mrs Coulter. She is a smart woman in a time when women were seen as less. When Lyra meets Mrs Coulter for the first, she asks if Mrs Coulter is a scholar. Mrs Coulter says "Not really", but Lyra thinks of female scholars in the same way as the scholars of Jordan College - "there were such people but, poor things, they could never be taken more seriously than animals dressed up and acting a play" (page 67 on UK hardback edition). They are taken as seriously as animals dressed up and performing in a play?! Lyra lives in a world where women are less, as something other. And this is reflected in the book. I can tell you named female characters on one hand - Lyra, Mrs Coulter, Ma Costa, Serafina Pekkala - whereas with men, I can name more. Lyra lives in a time where women were seen and not heard.

Also, am going to mention something that I think I have mentioned before. In this book, everyone has a dæmon, a creature that represent the person's soul. As a child, this dæmon can change form at will. But as a adult, it can't. And, the dæmon is the opposite to the human. So, if the human is male, the dæmon is female and if the human is female, the dæmon is male. But we meet a character who's dæmon is the same sex as the human. This is rare but what does this mean? Is this a hint of the character's sexuality? Philip never goes into depth in this book (though he does touch on LGBT characters in The Amber Spyglass) and am curious on this...

Speaking of dæmons, when we meet the king of the bears, Iofur Raknison, he's holding a doll. This bear is so desperate to be human and to have a dæmon, he holds a doll and pretends that this doll is his dæmon, which is sad. More sad than I first thought. 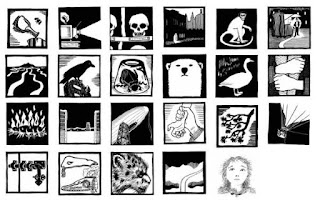 And still, The Silver Guillotine chapter is freaky as. Remember, dæmons are seen by readers as that character's soul. So, if the guillotine is to cut human from their dæmon, it's basically cutting the soul away from its human. And that is a terrifying thought!

The writing doesn't have the same impact on me as it did when I was sixteen. I still like it but, at time, it felt a bit like a head teacher speaking down to a student. This was rare, but I was aware of it and I felt annoyed over it. But still, I adore the chapter art that Philip drew himself...

But it still feels like it's stood the test of time. Yes, some readers will find this confusing and a bit dull, but I still like it hugely. Maybe not as much as I did back in the day but I will continue on with this series. Now, onto the Subtle Knife... but maybe not just yet...
Posted by Pewter Wolf at 16:00:00