Today is my stop on the Scarecrow Queen tour! And as you know, each of us bloggers are doing vision boards to reflect a character. So does the lovely author Melinda Salisbury and we compare. This can go either really well or very badly wrong!

Now, we were meant to pick six images each. But I am a total rule breaker and, without me even realising it, I chose 10! WHOOPSIE! 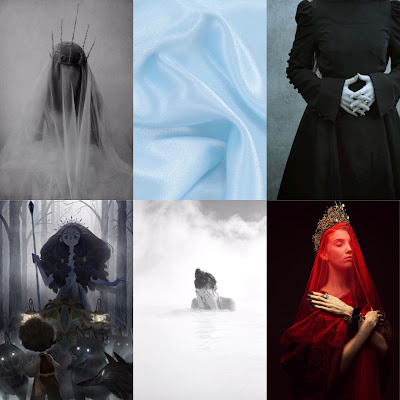 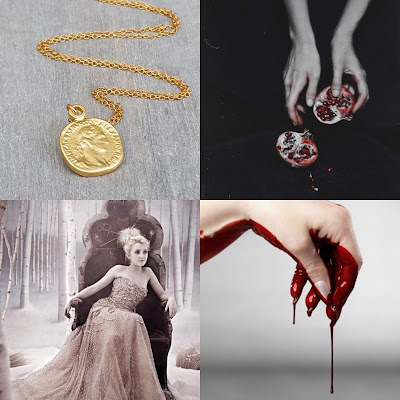 Whereas Melinda, though a Slytherin, actually stuck to the rules. I didn't realise Slytherins could do that...! 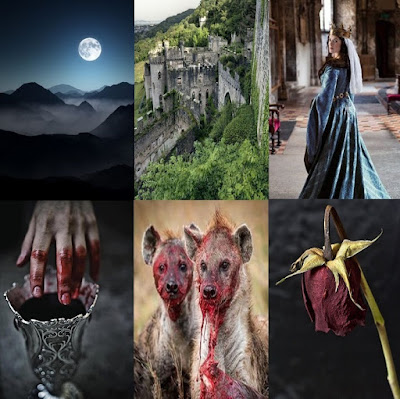 Interesting choice of pictures from us, huh? And yet, so similar! Well, we both wrote tiny comparisons for each of these. Here's my towards Melinda's...

It's weirdly frightening how similar our choices of pictures are. The pictures are different, but the meaning behind each picture. The hounds, the blood, the kingdom, the all powerful queen. It reflects her as powerful, ruthless and willing to go to lengths that we readers find horrifying.

What’s surprising is the choice of the dried rose and the setting pictures, something I never gave much thought to. With these, I can imagine her wanting to do what’s right for her people (but maybe going to extremes) and maybe, once, she was a beauty but time has caught up with her and her beauty is on the wane.

And Melinda's wrote hers. This is what she had to say about my choice for Helewys...

Interesting that we both chose images of hands in blood, it’s very Helewys to have that Lady Macbeth element to her. I’m also pleased we both chose images of women, looking both beautiful and austere. I think Helewys is such a definitive character I’m not surprised that our imagery was similar overall. I’m intrigued by the pomegranate, and what that relates to, though? I’m imagining Persephone and her condemning herself to spend time in the Underworld.

Am so tempted to explain what I, at the very VERY last minute, I chose that pomegranate image. She's half right about Persephone but there is another Greek goddess who has connections to that fruit... And I will leave you all hanging on that thought!

(Can I say, before I hand you over to author bio and info on Scarecrow Queen that this was an utterly blast? Thank you Lorraine for asking if I wanted to be involved and thank you Melinda for picking such cool images!) 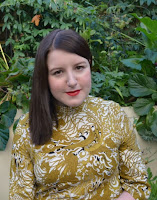 FYI, keep your eyes peeled on Melinda in the coming few days. I have heard rumours of a possibly contest a-coming...

Author Bio (For The Curious Among You)
When not working on her next novel, Melinda Salisbury is busy reading and travelling, both of which are now more addictions than hobbies. She lives by the sea, somewhere in the south of England.

Book credit (In case you're weren't sure...)
The Scarecrow Queen is the highly anticipated and captivating finale in the internationally bestselling trilogy that began with The Sin Eater’s Daughter. Published by Scholastic on 2nd March 2017.
Posted by Pewter Wolf at 07:30:00