Audiobook Review - The Arrangements: A Work of Fiction 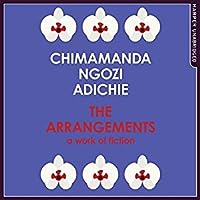 This, I feel, is going to be my last book/eBook/audiobook review of this year! My last of 2017! But is it going to be a good'un? Well, let's go for it, shall we?

The Arrangements: A Work of Fiction is a short story commissioned by the New York Times, who went to Chimamanda Ngozi Adichie and other authors to write any aspect of the 2016 Presidential Elections. Chimamanda's tale is the first to be published (the others will be coming in the near future, I believe) and it takes the story of Mrs Dalloway and spins it on its head with Melania Trump being Mrs Dalloway in this fictional imagining of Melania's day...

If you know me well enough (via Twitter and my other social media platforms), you know my opinions on President Trump, his family and his government. If not, it's highly negative. Let's leave it at that, shall we?

So, you might ask, why did I want to listen to this 30-odd minute reading of this short story? Several reasons. One is the narrator - I have only heard January Lavoy a few times in other audiobooks and I knew I would enjoy her reading of this satire.

The second was Chimamanda Ngozi Adichie. After reading We Should All Be Feminists (which I read last year), I wanted to read more Chimamanda's writing, but have been a bit overwhelmed on where to start. I do have Dear Ijeawele, or a Feminist Manifesto in Fifteen Suggestions on my kindle, but have been uncertain on when I should read it. But, when I saw this, I felt ready to attack it. It felt right to listen to this story in the current political climate in both the USA and in UK/Europe.

This story/satire intrigued me. I know it's fiction and I would have loved to be a little longer (this could have been longer and it still would have worked, in my opinion), but it made me tilt my head and go "what goes on behind closed doors? Does Melania like Donald's thirst for power? Does she like his children from his previous marriage? What if she's lonely? Or struggling with her sexuality? What if?"

It is a short story so you are skimming, but there was something here I sunk my teeth into. I enjoyed the writing, the reading and the ideas of The Arrangements so I think, next year, I am going to try my hardest to read Americanah or one of her other titles.
Posted by Pewter Wolf at 07:30:00