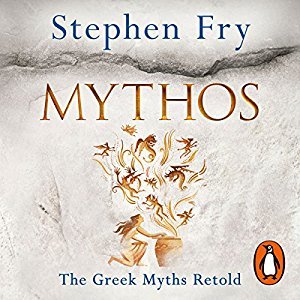 I think we all have a soft spot for Greek mythology. I do. I love myths in general and, if I wasn't scared of debts and everything else that comes with going to university, I think I would've loved to study myths (which would have been Classics, I think) or English. But I never went, but that's getting away from the point.

A few weeks back, I got a few credits on my Audible and asked what audiobooks I should listen to. I had a vague idea of one of the titles I wanted to do (Sleeping Giants by Sylvain Neuvel, though Forever and a Day by Anthony Horowitz did call to me as well) but I wanted something different. I wanted to try something new and something I would be a little afraid to try. The lovely Virginie at Chouett tweeted me and said she was nearly finished audiobooking Mythos and was hugely enjoying herself and thought I might like. A few days later, she sent me a copy of the audiobook via audible, which was a lovely surprise. Plus, neither she nor I lost a credit over it (it's a one off thing Audible do, according to my research so am planning to return the favour with a surprise audiobook choice of my own... be afraid, Virginie. Be very afraid.)

Mythos is Stephen Fry's attempt to retell some Greek myths. From the dawn of creation, the war between the Titans and the Olympians, the creation of mankind through to the myths told within the Gold and Silver Ages of Greece.

There's not much else to say about what the book is about as it's just that: Stephen Fry retelling some Greek myths. And guess what: I adore this. So much so, I am very tempted to buy the hardback edition of this to use for research or when the mood takes me to reread/relearn the myths. I didn't know them all, so there was always a new myth to discover and me to go "Oh!" over.

I devoured this audiobook and Stephen is a wonderful narrator. I love him reading Harry Potter and it carried over. Plus, when the author reads their own work, there's something more special about it. They get the rhythm of the story and the humour, and Stephen does add a lot of humour to the myths he decides to retell.

He admits from the start that he tries to put the myths in an order to make it easier for himself and the reader to understand, and this does help with him doing this.

There are two faults with this, and they aren't really Stephen's fault. The first is the names. There are so many of them. There are gods, titans, demi-gods, nymphs, furies, humans, and that's to name a few. It can be overwhelming if you're not on the ball. I might have to do a relisten myself to get them straight in my own head.

The second is length. Like I said before, Stephen tackles the gods and their lengths and he tackles the myths told from the beginning to creation all the way through the Golden and Silver Ages. He goes into a little more depth with the myths he tackles. But, because of this, ee doesn't touch the three other stages in Geek myths - Bronze, Heroic and Iron - so he doesn't tackle Hercules, Jason, Troy and other myths we're probably more aware of. But this gives me a small hope that maybe, just maybe, that Stephen will do a sequel and tackle these ages.

I adore this and I do hope Stephen does do another book about Greek myths. If not, I will probably go on the prowl for other books that tackle myths (hopefully Egyptian as I am fascinated with Egyptian gods, but open to read Roman, Native American, Indigenous Australians - in fact, will happily read any myths and legends. Recommend to me, dear readers!). My copy of Neil Gaiman's Norse Mythology is getting me the eye - should I be worried?

PS - Zeus. Mate, could you not stay faithfully? I mean... either see a sex therapist to talk about your sex addiction or let Hera leave you...
Posted by Pewter Wolf at 07:30:00