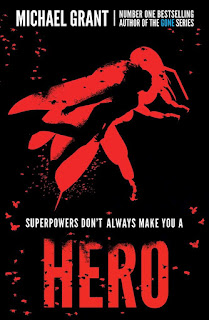 SURPRISE! I have a slight curveball for you guys today as it doesn't exactly fit with my Believathon reading of children's books, nor does it fit with my Nanowrimo! I HAVE A CONTEST FOR YOU GUYS!

Those lovely people at Electric Monkey and I got chatting on Twitter recently about the third and final book in the Monster trilogy, Hero. I admitted that I hadn't read this trilogy nor the previous series this follows, the Gone series (PUT THOSE PITCHFORKS AND TORCHES DOWN!) but I wanted to do something as I know some of you guys LOVE this series. "Could I host a small contest or something for Hero?" I ask and they replied, stupidly fast, "Why not do a contest for the whole trilogy?"

So, dear reader, I am hosting a small contest where one winner will win the entire MONSTER trilogy!

Now, before I go any further, let me chat what this series is about. Set after the dramatic conclusion of the Gone series, we follow Shade who witness the dome coming down, thinking that it would be the end of the troubles. How very wrong everyone was. Shade swears to never feel powerless again and then, four years later, she finds part of the meteor that began it all and discovers that she is changing, mutating...

And that's where the real troubles begins...

Actually, let me throw this book trailer up. That might explain better than me!


So, to co-inside the release of the final book in the trilogy, Hero, Electric Monkey is letting me do a contest where one winner will win the entire MONSTER trilogy!

Now, before I go any further with rules (it's been a while since I've held a contest on the Pewter Wolf so bear with me), I do want to say that I have been told this trilogy does come with trigger warnings for violence.

Ok, now the rules/boring stuff. To enter the contest, you need to fill in the GoogleForm below. This is a UK address only contest and the contest will close on Friday 15th November 2019 at 7pm! The winner will be chosen at random using random.org, and then will be announced on Twitter. The winner will, then, be emailed by me to get their address so Electric Monkey can send them out! And don't worry - once all that's done, all info will be deleted.

All good? Any questions, pop me an tweet/email and will answer the best I can. All that is left to say is GOOD LUCK and may the odds ever be in your favour.