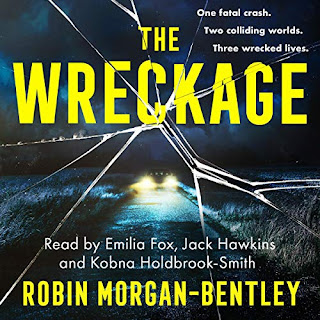 BLOG TOUR ALERT!!! Kinda. And it’s a review - SOMETHING I NEVER DO! I always feel very uneasy doing a review for a blog tour because what if I don’t like the book. So, when I was asked to be involved in the Wreckage tour, I said yes mainly as I was in the mood for a good thriller. I craved a something that would get me on the edge of my seat.

Told from two points of view (though we do have a third reader for one chapter quite late in the story), The Wreckage starts with Ben driving to work, a normal start to the day. Expect Adam jumps in front of Ben’s car, turning Ben’s world upside-down and inside out.

Wracked with guilty and desperate to atone, Ben meets Adam’s widow, Alice, and her seven year old son, Max, and an unusual friendship develops. But with the consequences of Adam's death weighting on both Ben and Alice, how far is Ben going to go to trying to make amends? And how far is too far?


It’s not your typical thriller. It’s a much slower burn of a thriller, almost like a slow-burn drama, but once things take a dark turn, it goes up a gear! I’m still thinking about the ending and the development of the story and the characters, even now a few weeks after finishing it. It’s such a subtle character development and character study, and it’s surprised me how easily mislead and blindsided I was until the penny dropped and I went “Oh no!”

Once that happens, I kept going “No. No. I don’t like where this is going and how it’s developing!”

Plus, with us following Ben and Alice, this story is told in a “he said/she said” format, so it’s interesting to see how these two very different characters view the same event and how one person’s “It was a wonderful moment” is another person’s “It’s the worst moment”. Plus, because of this, some readers might not like this as these characters are flawed and aren’t perfect and, at times, quite unlikeable, but these characters are rounded and you understand their motivation.

Plus, with this multiple POVs, the audiobook is narrated by Emilia Fox, Jack Hawkins and Kobna Holdbrook-Smith, it gives an extra layer to the story.

I do want to point out that this book might be a tad slow for some readers and this book does have a few triggers such as mental health, death, abuse and a few others so if you are going to read this, be safe. Plus, some of you might not class this as a thriller as it's pacing is slower than your typical thriller.

A slow burn of a thriller. I'm super intrigued to see what Robin Morgan-Bentley writes next...
Posted by Pewter Wolf at 07:30:00