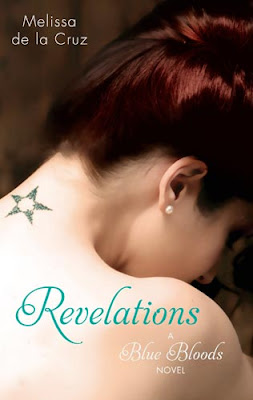 takes a lungful of air

I have just LITERALLY finished the third book in the Blue Blood series (Revelations) by Melissa de la Cruz, a book series I have started since JFK airport in New York City so, of course, this series has a small place in my heart connected to the Big Apple.

Now, let's get down to the plot. In New York City, not everything is as it seems. And our heroine Schuyler Van Alen is beginning to figure that out. She is a Blue Blood, one of the City's glamorous vampire elite. Or is she? While she's accused of being a sinister Silver Blood, Schuyler's love life gets complicated. She is in love with Jack Force, another Blue Blood, but he is soon-to-be-bonded (and twin) with Schuyler's arch enemy, Mimi. Plus, her best friend, Oliver, is falling in love with her.

And all the while, Bliss (friend to both Schuyler and Mimi) is suffering from blackouts and bizarre visions of a man in a white suite. Is she going mad, or is there something more sinister going on?

And now, the risk of the Silver Bloods is rising. The stakes are high, loyalties will be tested and the battle will in end in bloodshed. But the question is, who will survive?

Keeping this short, but like I've always said, the Blue Blood series is a guilty pleasure. Like Gossip Girl, a TV show I always compare this series to. This will keep you on your toes as, FINALLY, we discover who the Silver Blood is! And I doubt you guys will see it coming!
Posted by Pewter Wolf at 23:09:00