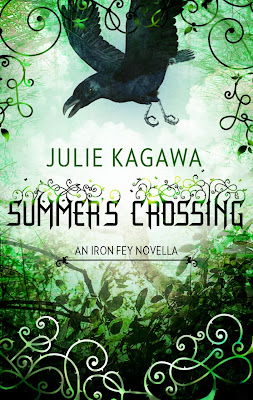 As some of you guys knows, I haven't read the Iron Fey trilogy by Julie Kagawa. I do have a copy of the first book - The Iron King - but this keeps getting pushed further and further down in my ToBeRead pile - but I had the first eBook Winter Passage (the story between book 1 and 2) and I read that, liking it quite a bit.

Summer's Crossing is a story told from Puck's point of view and, with the Winter Prince Ash, they must granted one last favor (fairies are BIG on their favors) forcing the prince to a place he cannot go without Puck's help — into the heart of the Summer Court. And, with this, Puck faces the ultimate choice — betray Ash and possibly win the girl they both love, or help the Winter Prince - his frienemy - pull off the biggest deception he will ever pull...?

Now, after the whole drama of trying to get the story onto my Kindle (and I have to thank Matt from Teen Librarian for a lot of help on that front!), it took a while to get my head round all the characters. But seeing as I haven't read the rest of the books in the series, that's understandable. But once the story got going, it became interesting.

But, I didn't connect with it. It was the last chapter which laid down the fountains for the Iron Knight, that held my attention. Now, I know that this series has bases in Shakespeare plays, but this ending with a Shakespeare play that I studied in school and quite like. So, for this, I would be interested to read Iron Knight. But, saying that, after reading Winter's Passage, I wanted to read the following book, The Iron Daughter.

But I think I prefer Winter's Passage, but I do want to read Iron Knight. Anyone know when that's out in the UK?