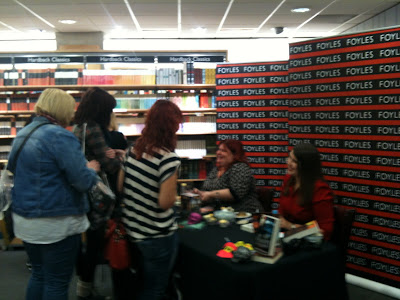 Last Wednesday, I randomly (and at the very last minute) went to Foyles in London for a Cassandra Clare book signing. And, luckily, Laura from Sister Spooky (an excited picture of her below!) had a spare ticket so I went to the event with her & Leanne from District YA. There were also, other random bloggers at the event – Lynsey from Narratively Speaking, Sarah from Feeling Fictional, Kirsty from Overflowing Library & Casey from Dark Readers but most of us were fans and getting quite excited (and while we were in line, we had random conversations of Vampire Diaries [which I don't watch!] and other weirdness that I have forgotten!). And then, as we entered the room, we were given a mask (which, if you were lucky to get a colour dot on the inside, you would win a special surprise. I didn't so we move along...) 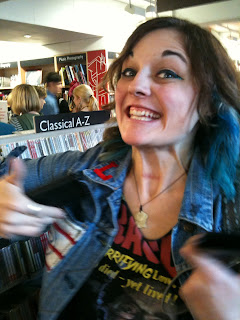 So, in the room we went and we had the event where Sarah Rees Brennan hosted the event, where she asked questions to Cassandra Clare. It was a mix of questions from the audience and from "the cauldron". Which range from some that the movie ("What scene in the upcoming movie that you are most excited about? "Magnus's party!"), information about The Dark Artifices (I forgot about this! Here is some info), writing (Would you write an adult novel? [someone said, loudly, "An adult Magnus's story would do for me!" - I love that person!] and Cassandra replies "If the right idea comes along"), to asking about South Carolina (don't ask!) to spoilers which I won't share as this does touch on both Mortal Instruments and Infernal Devices (and seeing as I haven't read City of Fallen Angels, am NOT going there!).

After that fun (and it was fun so thank you to Cassandra and Sarah for chatting fun-ness!), everyone went into line to get their books signed. And we all had quite a few copies of Cassandra's and Sarah's books (one day, I WILL read Demon Lexicon! I WILL!!!). The line was longer so the lovely people for Foyles offered sweets to us (which was cool as they had the shop name in it!) which made us all happy and hyper again. And then, we got out books signed by Cassie (I had six copies and felt terribly guilty! HER POOR HAND!!!).

It was a fun and random day which ended with several bloggers going to the pub and chatted madly about books and other hyper things. So, I have to thank the people of Foyles, Walker Books, Cassandra Clare, Sarah Rees Brennan, Laura & Leanna and everyone else who made the event cool! THANK YOU!

PS - Just remembered. I have a review of Clockwork Angel, the first book in the Infernal Devices trilogy that will be out next Tuesday on this blog (and I owe Mundie Moms a huge THANK YOU!)
Posted by Pewter Wolf at 13:13:00