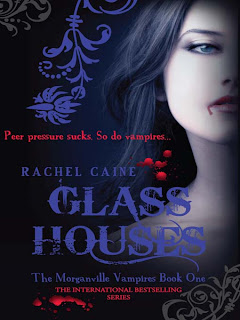 This was one of the first ebooks I got when I was given my Kindle. It was on a sale and I was curious of it. And then, just when I had half-forgotten about it, Jo from Once Upon A Bookcase started her Morganville Vampires Reading Challenge (don’t know about it? Click here to read more about it). This reminded me that I had Glass Houses.

So, when I was doing my Kindle Month, I had three choices (Glass Houses, Poison Study and Intrinsical). I threw it out there on Twitter (pick 1, 2 or 3) and, randomly, Glass Houses was picked.

In the small town of Morganville in Texas, Claire Danvers just started college. And it looks like it could be murder. Not only has she found herself on the wrong side of the meanest girl in town, Claire finds herself inside a secret. A secret so big, it engulfs the town and everyone in it. Expect for Claire...

Now, this isn’t your typical vampire story (did I reveal the secret? Oops!). Well, it wasn’t a typical vampire read for me, and maybe it’s because of this, it didn’t sit well with me. I’m not 100% certain if its the writing style that bother, how she tackled bullying (which is a huge issue I have with the story, FYI) or how Rachel wrote the story, but there was something about this that I couldn’t warm to.

With most of the vampire novels I have read in the past few years (Twilight, Blue Bloods & Sookie Stackhouse to name a few), they twist the vampire myth to make the mythology their own. However, with Glass Houses, this seemed to be very close to the mythology. Vampires don’t really like going out in the daytime, they have fangs and they have a hierarchy. But there are some times that weren’t answers (if they hate sunlight, why are they in the middle of Texas? [I believe that was answered in a later book]) and I think that (and the character development) is the key to why this series is so popular.

Now, I want to talk quickly about the bullying that was featured in here. As you know, I am quite edgy when it comes to certain subjects. Bullying isn’t one of them. When I read Hollow Pike by James Dawson, I felt that he tackled the issue of bullying with a great amount of sensitive, yet was unflinching over what this does. This book wasn’t anything like that. Within the first chapter, Claire is pushed down the stairs and, halfway through the book, someone tried to throw battery acid on Claire’s back. This wasn’t bullying. This was worse. The character lived in fear that Monica was going to kill her and, to me, it felt like this wasn’t tackled and, when it was, it was brushed aside with a “Oh, Monica’s a vampire so she can do what she likes so you have to put up with it or shut up”, and that upset me. People get bullied and to have that reaction was horrifying!

But, saying that though, I found the last 20% of the book gripping. And for that cliffhanger ending – if you fell for the story, you will be itching to get your hands on book two, Dead Girls' Dance, as you won’t see it coming....

As for me... it’s not my cup of tea. But I won’t say no to reading book two in the series (I did want to jump to book 11, Last Breath, but I have been told by two bloggers (Jo & Braiden) told me that you have to read the series through due to the game-changing nature of the series and the character development). I’m in no rush to read Dead Girls’ Dance so when I do get round to it, I expect something awesome and shocking to happen or I might leave the series alone...