It's rare (as you know) that I review two short stories in one review but seeing as these are both written by Agatha Christie, and are both in connection with Miss Marple, I will make an exception.

I somehow came across that HarperCollins had released Agatha Christie's short stories individually by sheer fluke. Not sure how but I discovered it and started snooping. I asked some Twitter pals (who are Agatha Christie nuts) on which to read. They suggested a few, and I narrowed the search down to these two: Tape-Measure Murder and Motive V. Opportunity (though a Harley Quin short story, The Shadow on the Glass has caught my eye also...). Plus, both were 49p each and, with my lovely blog pal Emma at Book Angel Booktopia kicking off her Classic Carnival next week (which I am taking part in), it couldn't be more perfect!

With Tape-Measure Murder, Miss Politt has been knocking on Mrs Spenlow's door but with no reply. When a neighbour decides to look through a window, she finds Mrs Spenlow, lying on the floor, dead. The whole of St. Mary Mead is convinced that it was her husband who killed her, as he showed very little emotion over her murder. But Miss Marple isn't so sure... 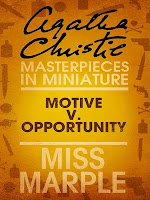 And with Murder V. Opportunity, the members of the Tuesday Night Club are told a story about Mr Clode, a man who, on his deathbed, wrote a new will. It stated that most of his fortune should go to a spiritualist, and not to his nieces and nephew. But when the envelope containing the will was opened a few months after his death, the will is blank.

I read both of these very quickly. Half an hour each and, with one of them, I think I solve it very quickly while the other surprised me as it felt, almost, like Agatha Christie tricked me, and yet, sadly, all the clues were there. Up to a point.

These are fast reads. Literally spend a few minutes on the journey to work and you're done. It's enough. And it was enough for me. So now, off to read a real novel (but which...).