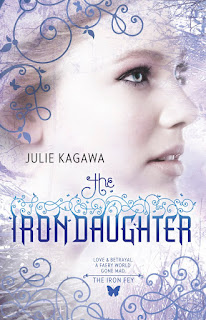 Last year, I reviewed The Iron King by Julie Kagawa (not read it? Here you go!). I enjoyed reading it as it was a sunny read that I read over the summer holidays. That Christmas, I was given the sequels, The Iron Daughter and The Iron Queen. And now, almost a year after receiving the books, I have FINALLY read The Iron Daughter.

After the events of The Iron King and the eNovella, Winter's Passage (here's my review!), half Summer faery princess and half human, Meghan is held prisoner in the Winter faery's court. No one believes her claims that there are Iron Fey. And the only other person who knows about the Iron Fey - Prince Ash - is missing. And when he does appear, he acts all cold and distant towards her, even though they had feelings towards each other. Was he planning her emotions all along? And how can Meghan prove that the Iron Fey do exist as war begins to loom on the horizon...

Now, I am in two minds over this. I do like most of the plot. And the characters - I love Ironhorse in this book. I was very happy when I met Puck and Grimalkin (even though he still reminds me of the Cheshire Cat, but who's very sarcastic) And I enjoyed the introduction of Leanansidhe, though her saying "Darling", "Pet" and "Dove" took a few pages to get use to.

Now, I have one or two problem with this book. It's Meghan and Ash. Their relationship felt flat with me. I think this is because the first 100 or so pages, we had Ash acting all aloof towards Meghan. It kinda put some distance between the reader wanting the two characters to get together. But maybe it's because Julie wanted us to get excited over Puck and his feelings towards Meghan.

However, the other problem I have is Meghan herself. In the first half of the book, Meghan seemed to be either: crying, on the verge of crying or had just cried. I'm sorry, but did Meghan have a character transplant? In The Iron King, Meghan walked into the world of the fey - the Nevernever - to save her brother. She went into a mystical land, inhabitted with strange creatures and killed an faery king made of Iron to save her brother WITHOUT thinking of herself. Here, however, she was in tears. Where's our fearless heroine that made a deal with Ash to go to the Winter Fey's court if he helped her save her brother (hence why she's there. She made a deal!) and not once did she go "I kept my end of the bargain. I should think about leaving/escaping now..." 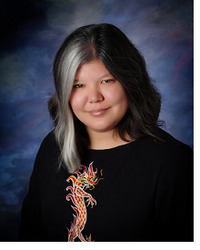 Also, she seemed to be mostly upset because of Ash's reaction to her. In The Iron King, they fell in love with each other but, in the Winter Court, Ash is acting cold, distant and even aloof to her. But, Meghan, didn't Ash say in Winter's Passage and then again in the start of The Iron Daughter that the winter fey see emotions as weakness and will use them as weapons? Do you think that maybe, JUST maybe, that he's acting like a total jerk to protect you? No...? Oh no, here come the waterworks...

This kept getting repeated for the first half of the book. Once the action kicked in, Meghan was more like the Meghan we met in Iron King.

I think I'm being a little harsh. I read this straight after reading two excellent reads - Days of Blood and Starlight by Laini Taylor and Roar & Liv by Veronica Rossi - and when you come away from stories that you love, anything you read almost immediately afterwards will seem a bit... underwhelming.

It's an OK read. I will read The Iron Queen, but if Meghan starts crying again, I will not be held responsible for my actions...