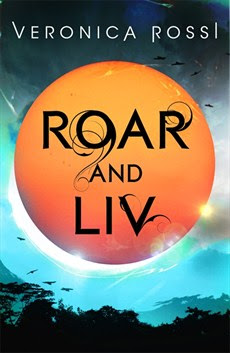 Earlier this year, I read (and thorough enjoyed) Under The Never Sky by Veronica Rossi. So when the news came out that a eNovella prequel was going to be released, I was kinda excited. But the UK publisher didn't reveal that they were going to publish this till a few weeks before its UK publication. Hence me going "PREORDER!" then waiting at my kindle...

So, Roar and Liv. This is the story about Roar, who finally finds a home within the tribe of the Tides. His best friend, Perry, is more like a brother to him and Liv, Perry's sister, is the love of Roar's life. But when Liv and Perry's elder brother (and Blood Lord of the Tides), Vale, returns from trading with another tribe and makes a decision that turns Roar and Liv's worlds upside down...

If you had read Under the Never Sky, you knew where the relationship goes, but if you haven't, you hope that they will find a way to be together.

Now, as you guys are probably aware, I do love eNovellas. Not so much a fan of the prices. This was £1.49. While I loved reading this (I had to FORCE myself to read this over several days as I could have so easily read this in one go), I'm not 100% certain most of you guys will buy this on its price. If you're a fan of the series, you would buy it without pausing for thought. If you're new to the series, I would suspect you would pause and think over it before clicking the "Buy" button.

But I loved this eNovella. I really did. I only wish Roar's story was longer as I could have SO EASILY read more about him and Liv (write another eNovella from Roar's point of view, Veronica Rossi! PLEASE!), and the teaser chapters from Through the Ever Night made me very excited. I can not wait to see where Veronica take us next year!