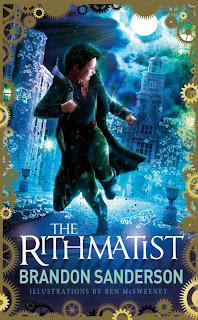 For the past few weeks, I have been thinking about diving back into the world of audiobooks. But the problem is I seem to be a bit hit and miss with them. So when Stefania from Midas PR emailed and asked if I would be interested in reviewing the audiobook of The Rithmatist by Brandon Sanderson (a New York Time bestselling author who I have never heard of but I know most of you guys have), it came at the right time. And, also, a story that felt fantasy/steampunk and yet the most powerful weapon in this story was a piece of chalk... Ok, I had to find out why!

At the Armedius Academy, the chalkmaker's son Joel wishes he was a Rithmatist. Sadly, that will never happen. He can only watch while other students learn the art of Rithmatics. But students are disappearing. Rithmatic students. They disappear at night, with tiny drops of blood found on the floor. There are also Rithmatic drawings on the floor, as if the students wearing dueling, fighting for their lives. And a new, unknown Rithmatic drawing is found on the walls. Assigned to a professor who is helping the investigation, Joel and his new Rithmatist friend, Melody, find themselves inside something that could change their world forever.

But has happened to the Rithmatic students? Were they kidnapped? Murdered? Or has something more sinister happened? And who - or what - is behind all this?

I enjoyed the audiobook and the story. I liked how the narrator, Michael Kramer, read the story and I liked the mystery of the story of what was happening with these disappearances. I liked how the world, though quite fantasy and steampunk, was mainly driven by chalk. I liked the mystery side of the story and the twists! Oh, I very much liked the twists and how the story didn't answer everything at once. Even when I was listening to the last hour of the story, things were still being revealed and twists still appeared that will make the reader/listener go "WHEN DID THAT HAPPEN?!" and "WHAT DOES THIS MEAN?!" as this book is meant to be standalone (though with how the book ended, there could very easily be a sequel, though I like the idea that this stays a standalone).

I kinda like the main characters of Joel and Melody, though at times they did feel a tad 2D. But the more I listened to them, the more I liked them. Joel wishing he was a Rithmatist but can't so he studies it secretly (and with his Maths skills being almost off the charts) whereas Melody is a Rithmatic student but feels the pressures of being a Rithmatist-in-Training and, at times, doesn't want to be a Rithmatist because she feels she isn't good enough. These two characters complement each other and I like how their friendship grew and developed.

I have two faults. They are not huge faults but these faults do make me think that, if you are unsure to read the book or listen to the audiobook, I feel I should say read the actual book or have a copy near you, just in case. The first fault is Part 1. After the prologue which was dark and exciting, Part One... well, wasn't. Part One felt very much like an introduction to the world, giving us the rules, explaining what Rithmatics is, get the characters into the right places so they could be involved in the main story, etc. Part One set everything up and, while I understand this is important to the story and is needed to explain the world that we're in, I couldn't help thinking "And when are we getting to the main story?"

My second fault was this: at the end of every chapter, there is a Rithmatic diagram. Here, you see a range of diagrams to explain things that are referenced in the story (ie, what a Line of Vigor is, what a Line of Warding is, how you use these in combat, etc [see right]). Now, as you are aware, I listened to the audiobook and this is where the problem lies. If you are reading the book, you can see the diagrams and you understand what they look like and how they work. However, if you're listening to the audiobook, while these are explain, you have no real idea what they look like. So, if someone mentioned "You need a 9-point circle of Warding with an ellipse", as an audiobook reader, you have no idea what this looks like, no real idea why this is important (when drawn correctly) and therefore, this distracts you from the story. While some of the Rithmatic diagrams are important (it helps to understand what exactly a Line of Vigor, Line of Forbiddance, Line of Warding and a Line of Making [aka Chalking] is), the others felt like a pointless footnote.

So, while I did enjoy the story once I got into it, my advice would be maybe get the book or borrow a copy from your library so you can understand the diagrams. But if this story sounds right up your street, go for it! And if you're on the fence, the prologue and the first five chapters are free to read at Tor.com.
Posted by Pewter Wolf at 07:30:00