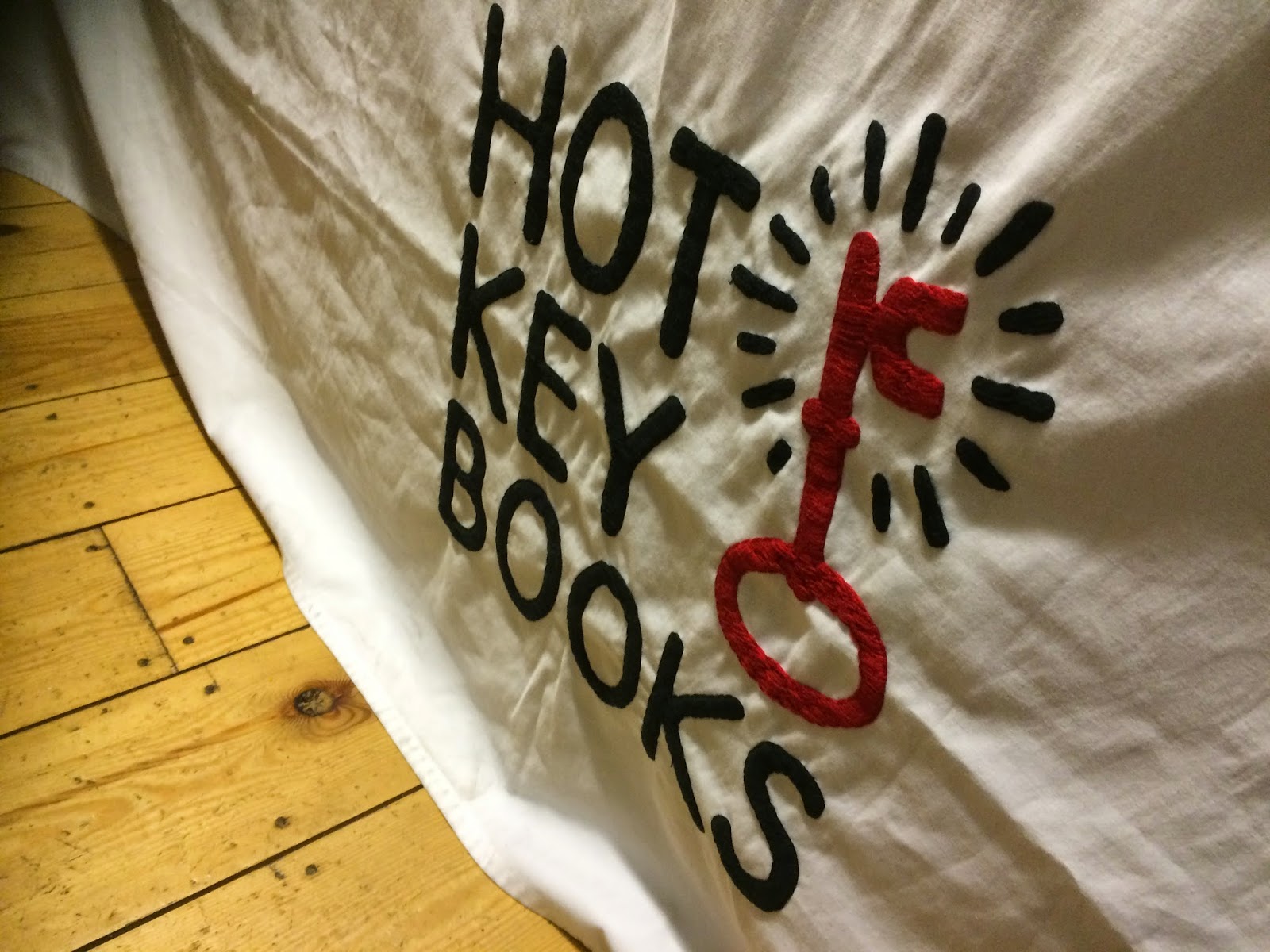 Earlier today, I was allowed to go to the Hot Key Books/Piccadilly Press Blogger's Event in London. It was so nice to catch up with blogger pals I haven't seen in ages or meet new bloggers I haven't met before or only just met on Twitter (and some people I watch on YouTube but was too scared to talk to...). I was introduced to someone (was it one of the authors?) as "The One With the GIFs". (Thanks Stephen from Dark Readers... Remind me how to make GIFs again when we see each other again!)

So, after hunting Jim from YAYeahYeah and Luna from Luna's Little Library down, we went to Hot Key HQ where we caught up, had tea or coffee (Of course I had tea! Don't you know me at all?!) and some nibbles, we were ushered into a room and the lovely Hot Key Team (and a few authors) chatted about books that they are going to publish from now until possibly the end of the year.

There was A LOT of books, most of them quite dark in tone (perfect for me!) so what I plan to do is do tiny write up on the authors who was there and then pick some books at random that I want to read. I have a long list so will narrow it down to a few.

First author doing a quick chat to us huge wolves known as book bloggers was James Dawson. Is it weird I got a bit of beard envy? Anyway, James chatted about the blogging community (and we love him for it) before he chatted the book that will be out later in the year. All of The Above is a contemporary love story where our main character gets a strong physical attraction to one person, but begins to realise that she has a strong spiritual connection to her new best friend. It's not a typical love triangle (it better not be), but more tries to answer the question "What if you fell in love with two people at the same time?" It will be very exciting to read this because, as James himself said, this is new to him and is, basically, starting again from scratch.

He also admitted he wrote this in NaNoWriMo and swore he would NEVER do it again. 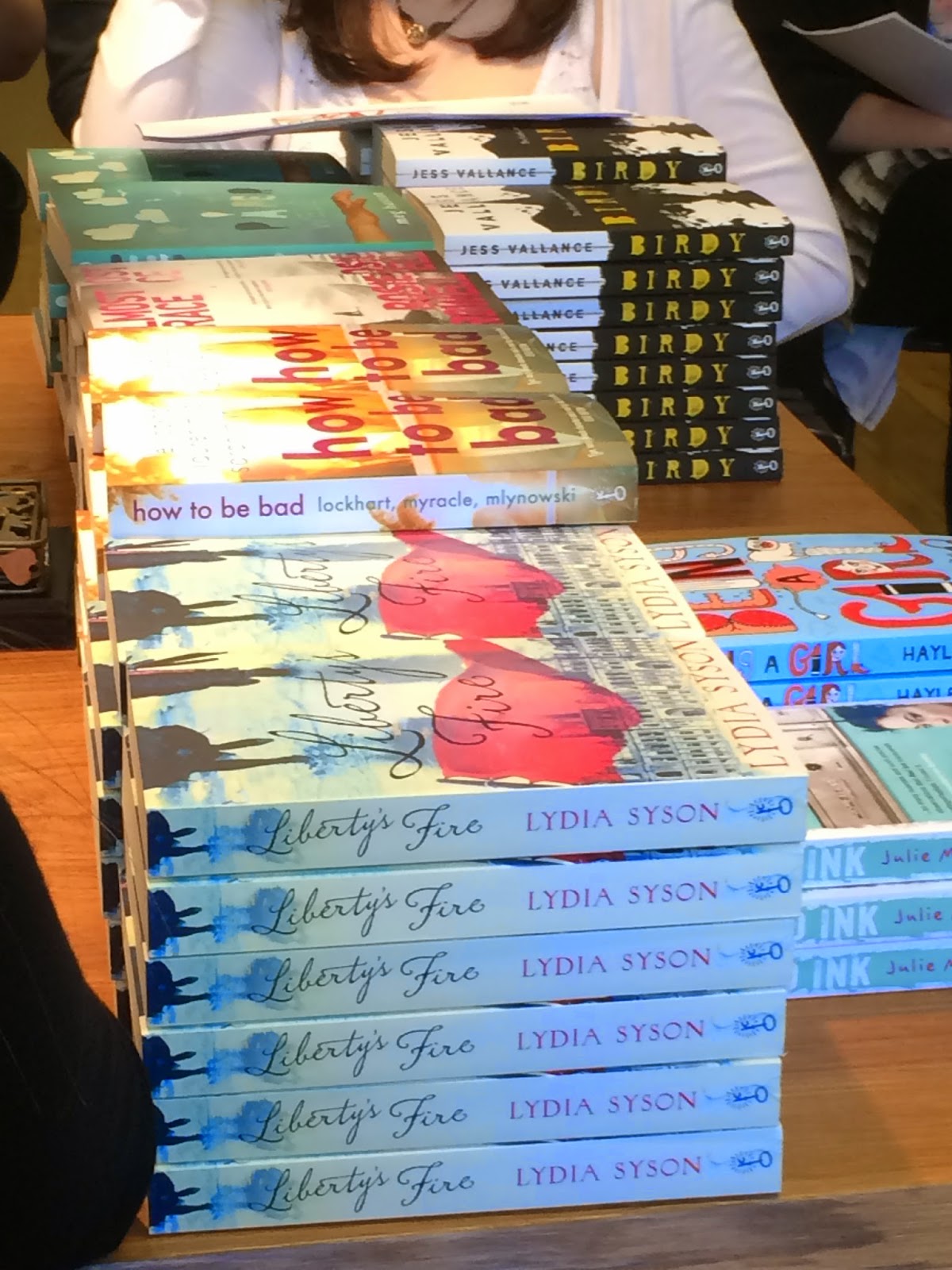 The second author who chatted was Lydia Syson. She was chatting about her latest book, Liberty's Fire. This is a histroical fiction set around 20-40 years after Les Miserables (not the musical, but the time it was set). Life after the war has been tough but it could get a lot toughie for our leads. With an enemy at the gate and the barricades, will our characters survive? Now, I have another book by Lydia to read, but this sounds so delicious that I am planning to read this VERY soon. And this comes from someone who doesn't really like historical fiction.

Jess Vallance was our third author, chatting about Birdy. Our main character is Frances, a loner who is asked to look after the new kid at school. Instead, she meets her oppisite, Alberta, and the two become unlikely friends. But is this friendship too good to be true? Frances begins find things out and soon, things become toxic. This does have a feel of Follow Me Down by Tanya Byrne, but it looks more into toxic friendship and how a friendship can turn ugly quickly.

Our fourth author was Hayley Long, who was chatting about two book. Her first was Being A Girl, a non-fiction which talks about growing up for girl. Talking about feminism, periods (and all the terms for it - some that will never leave my brain. Thanks Hayley), friendships and growing up. Hayley's second is Sophie Someone, a story about Sophie who makes a startling discovery about why her family moved to Belguim when she was four. So startling that she can't put into words how she is feeling and, to cope, she starts making up her own language to cope. This is going to be an interesting one but I shall be intrigued on your reactions.

Julie Mayhew spoke about The Big Lie after this. The Big Lie came out of a conversation with her son over the question "What If the Nazi won the war?". After trying to find a book for her son via Twitter (and us failing! WE FAILED!), she decided to write one herself. In modern England after the Nazi won, we met Jessika and her best friend, Clementine. Jessika is a good girl. Clementine isn't, and the Regime has noticed. But it's more than this. It questions revolution, feminism and sexuality...

Last author to round this all off was Laura Dockrill, chatting about Lorali. A story about a mermaid - don't groan. Stay with me!  - who is washed up on Hastings and who meets Ryan and the story between them. There is sirens,"fit" pirates and OTT mermaid-obsessed bloggers (which, Laura reassured us, isn't based on us) and, this book celebrates being the odd one out.

And that's it for authors. Sorry if that took a while.  Ok, now, onto a few books that I am quite excited over.

The first is To Hold The Bridge by Garth Nix. This is a collection of short stories with an Old Kingdom novella. I love the Old Kingdom so I am desperate to get my hand on this. I might have to preorder this. Or beg.

Another book that I might be begging or preorder is These Shallow Graves by Jennifer Donnelly. Now, most of you will know her name from her books A Gathering Light and Revolution. But this sounds yummy. Set in New York 1890s, our heroine (Jo) knows her father didn't commit suicide, but can she prove it? How far will she have to go for the truth?

As Black As Ebony by Salla Simukka is the third and final book in this trilogy and I can not wait to see where this series is going! 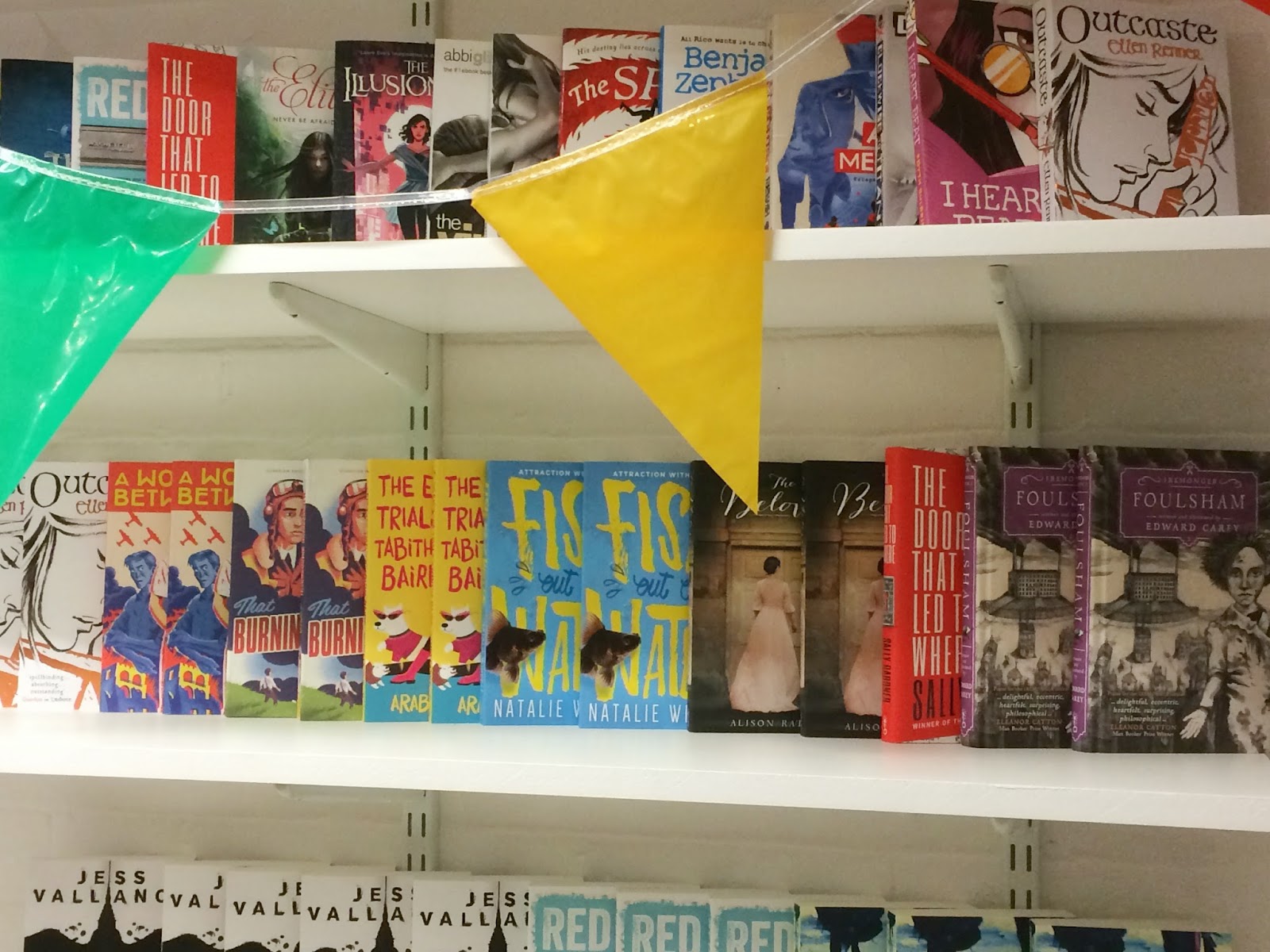 Monsters by Emerald Fennell is a creepy read, I sense. Two 13 year olds meet and become friends over their shared interest in murder. And then a murder happens. The two friends decide to investigate because murder is cool. It has a dark, creepy feel that reminds me of Dexter, but we shall see...

And now, for a change of pace. Counting Stars by Keris Stainton is a Fresh Meat-lite story where our lead moves into a flat with six other students. Feeling like the outsider, she decides to blog and tweet about her friends lives. Which is fine - until a secret is outed. According to the publisher, Rainbow Rowell fans might like this, but I follow Keris on Twitter and love her tweets so I will be reading this as soon as I can.

After this, we chatted about the books, life, writing and just having a wonderful time. I really must thank Hot Key for organising this. It was so much fun and I don't think us hyper book bloggers scared the authors THAT much. Plus, a few of us were cornered to record our reactions to the books and pick one we are VERY excited over. I was cornered and, sadly, there is a video of me swearing. There is reason and unless I want to get on Sanne's bad side, I will be super kind and loving to Hot Key...

But seriously, thank you for today! I can not wait to get my reading game on and start reading these beauties!!!
Posted by Pewter Wolf at 20:53:00