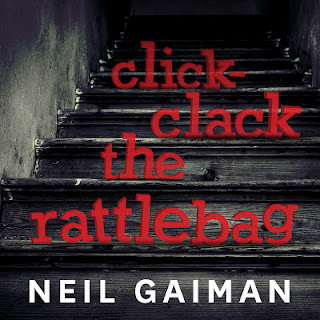 I downloaded this back in 2012 (so I highly doubt you can find it on audible.co.uk) and when I downloaded the app on my phone and connected to my account, I rediscovered this and it was less than 15 minutes so I fancied relistening to it. Just to see how creepy it was.

Ok, let's get these questions started!

WHY DID YOU REREAD THIS BOOK?
I downloaded the Audible app on my phone and it showed me my history for the past few years of purchases and, while I was downloading an audiobook I am going to review in the next few days, I spotted this and went "Oh! You would be cool to relisten to. I remember you were slightly creepy." and downloaded it without a second thought.

WHAT WAS YOUR HONEST OPINION OF THIS #RE3 THE FIRST TIME YOU READ IT?
I think I really liked it. It was very short and yet, slightly creepy and gothic. I loved Neil Gaiman's voice as he was reading the story.

IS THERE ANYTHING YOU WANT TO SAY?
I believe this story is in an anthology but, I discovered a live recording on youTube (as I don't think you can get it now via Audible) so I will link you to it now.

BECAUSE OF THIS BOOK/AUDIOBOOK, WILL YOU BE READING/REREADING ANY OTHER BOOKS BY THE AUTHOR?
I have since my first listen of this have read Neil Gaiman and am very intrigued over reading more. Not sure where to start. I was thinking Good Omens, but might reread Coraline...
Posted by Pewter Wolf at 21:02:00