This book has been a long time coming. I started reading this at the end of June and only just finished it a few weeks ago. I didn't want this to be my main read. I have too many other books that I need to read and review for the blog (oh, if only I could stay home and get paid for reading books and writing my blog. That would be the best job ever. That and actually becoming an author rather than wishing for it.).

But here I am. Finally, talking about Harry Potter and the Goblet of Fire!

Am going to say this here, but this was the book I was the most excited to read within this year long challenge. I'm not sure why, but it's the book I am the most determined to get to. Now, that I have read it, it's now Half Blood Prince. I think it's because out of all the Potter books, Goblet is the one I really like and, strangely, not the biggest fan of.

But oh, how that changed. I ADORED reading this. This is the book where things turned and I became excited. It might now be my fave book in the series now (I know! In this year long challenge, this might have overtaken Prisoner of Azkaban as fave book!!!).

This book is dark. I know that all the books are dark (I feel that Chamber of Secrets is very dark!) but this book could be the darkest in the series for most readers. We start with a murder of Frank Bryce (The Riddle House chapter is my favourite opening chapter in the series!), then we go to light chapters - the Quidditch World Cup, friends, fun times. Then the book turns. Death Eaters, Dark Marks, Triwizard Tournament, the Goblet of Fire spitting out Harry's name, Ron and Harry's friendship nearly in ruins, fame's bad side coming out, dragons, mermaids, S.P.E.W - it spins into the dark side very quickly.

It's this growing sense that the worse is yet to come. It's unlike the other books because we know from the very first chapter that Voldemort is at the heart and we know he and Harry are going to meet, so we're watching this unfold before our eyes, either fearing the worse or going "Maybe we got it wrong..."

And then, it happens. And I sped through those chapters. I think I read these chapters the first time in a state of horror, but now, I relish them.

One of the most interesting things for me as someone rereading the series is seeing little hints of what's the come. JK Rowling does an excellent job of lying the groundwork for the next book or a later book in the series. In one chapter (The Pensieve), we are told about the Department of Mysteries and Bella Lestrange. Both important to Order of the Phoenix. At the end of The Unexpected Task, Harry asks if Lavender will go to the Yule Ball with Ron (and guess what happens in Half Blood Prince...). Same with what Dumbledore said to Snape in The Parting of the Way, "You know what I must ask you to do. If you are ready... if you are prepared..."

SNAPE WAS DUMBLEDORE'S MAN! This line confirms it.

Speaking of Snape, reading this book made me dislike Snape more than I did before. There was a line in this book which made me question Snape as a character. In The Weighing of the Wands, Draco and Harry shoot spells at each other. The spells hit Goyle and Hermione. Snape comes along and tell Goyle to go to the hospital wing, but when Harry and Ron tell Snape what Draco's spell did to Hermione, Snape looks at Hermione and says "I see no difference."

This line made me suddenly wonder if Snape is sexist. Which makes me think about his character throughout the series and towards his relationship with Lily. I feel I might be looking into this further once I have read the entire series.

But there are things in this books that I forgot and it was wonderful to go "Look! The film got it wrong!". Beauxbatons and Durmstrang are both mixed-sexed schools, and there is a moment where some of the girls of Beauxbatons are wearing headscarves - whether because it was cold (which seems more likely) or because of religious reasons. Also, I was reading Karkaroff as someone (via a podcast?) hinted that Karkaroff could be gay. It is possible, but as he is a former Death Eater (and JK has never said), we can guess...

Rereading this is also interesting due to "Ring Theory". People say Goblet of Fire stands on its own - which is very true. But I think it is also very linked to Philosopher's Stone and Deathly Hallows. This is the start and the end, tied together. Voldemort loses his power due to innocence at the start Philosopher's Stone, Voldemort's return to power at the lost of an innocent in Goblet of Fire and then his true downfall in Deathly Hallows. This book is important to the series and is hugely important to the Ring Theory.

Also, can we talk about Cedric? I never warmed to Cedric's character, and people question why Harry's grief comes so late. Well, let's look at this at the chain of events. Cedric is murdered, Harry is bound and gagged, his blood is taken and Voldemort returns to his body. Then the Death Eaters come and Voldemort talks (aka emotionally tells off his Death Eaters) about what happened to him in the past few years. Voldemort and Harry duel and echoes of Voldemort's past victims come out of his wand, and help Harry escape with Cedric's body. They return to Hogwarts, everyone is shocked over Cedric's murder and Moody takes Harry away. Then we discover Moody is the one who put Harry's name in the Goblet. Dumbledore attacks Moody and we discover Moody isn't Moody but a Death Eater in disguise and we hear the whole horrid plan. Harry talks to Dumbledore about what happened it he graveyard, before Dumbledore takes Harry to Hospital Wing and makes him drink a sleep potion. Harry sleeps for a short while then wakes up to hear Dumbledore and the Minister of Magic argue over Voldemort's return. Fudge (the Minister of Magic) doesn't believe it and, basically, calls Harry a liar. Harry is then told to drink rest of sleeping potion - and that's the end of the chapter. The next chapter starts several weeks later.

But this whole series of events happens in a very short space of time - two hours, maybe. There is no time for Harry to process what had happen because events outside his control took over. That is why Order of the Phoenix starts the way it starts. That's Harry getting to grips with what happened to him. And he was doing this on his own.

We, as the readers, have time to recover from our shock. Harry never has that. (And that's why watching Cedric's father in the Goblet of Fire movie is so heartbreaking. That scene, in my opinion, is the only thing that film got right!) 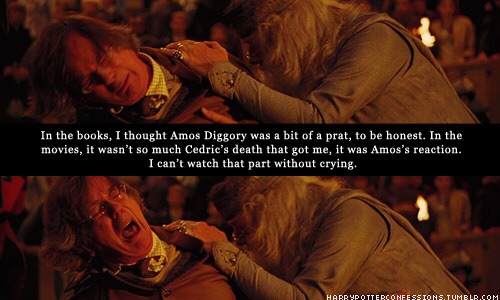 And Wormtail. Ok, this isn't a big thing compared to Cedric, but rereading this made me see something I have always missed. When Voldemort gives Wormtail his silver hand, Voldemort says "Let your loyalty never waver again." And look what happens to Wormtail in Deathly Hallows. His loyalty wavered. So, of course, the silver hand reacted, killing Wormtail. Because the hand was never Wormtail's, it was Voldemort's. Just wanted to put that out there.

But rereading this was wonderful. I forgot why I read this book so often in the year after it's publication. But yes, LOVED IT (even though this is the book JK said she would rewrite if she was ever asked). BRING ON, ORDER OF THE PHOENIX!!!
Posted by Pewter Wolf at 07:30:00

Email ThisBlogThis!Share to TwitterShare to FacebookShare to Pinterest
Labels: #re3 Harry Potter ReRead 2015, Bloomsbury, Harry Potter, Harry Potter and the Goblet of Fire, JK Rowling, re3