If you have read a post I wrote at the beginning of September (click here if you haven't), I have had a bad run with audiobooks of late. It was a number of things, but for one reason or another, I just couldn't click with them. So, when the lovely peeps at Midas PR asked if I want to review some audiobooks for them, I have been quite hesitant because of the audiobook nightmares I have encountered.

But, with Trigger Mortis, I was intrigued. I have tried (and failed) to read James Bond before but I do like Anthony Horowitz and I knew he can write spy novels well - I mean, Alex Rider, anyone? Plus, you have David Oyelowo reading. It can't be that bad... right?

Set after the events of Goldfinger, Bond is on his next mission. He is asked to go to the Grand Prix, driving on one of the most dangerous tracks in Europe, trying to stop the Russians from sabotaging the race. But when he sees an agent of SMERSH with a rich Korean - Jin Seung Sin - who people dub as Jason Sin (because they either can't pronounce his name or are too lazy to learn it), Bond's mission turns a turn that will see him racing against the clock because what started as a car race could actually be the biggest race of them all...

Like I said earlier, I haven't read Ian Fleming's books (only the movies - don't judge me), but I enjoyed myself listening to this. It had the essence of Bond from the books (I'm not sure if this would work if it was movie Bond) where he smokes too much, drinks too much and enjoys women (I am going to talk about this a little later). It was exciting, fun thriller, which made me remember that Anthony is good at writing thrillers.

Also, Anthony wrote a villain - Jin Seung Sin - that creeped the heck out of me, then made me feel sorry for because of his back story (how ironic that his backstory is reflected with the recent events happening in Syria  and refugees in general) then back to "This guy is nuts and doesn't care who he hurts!". I, weirdly, found him a fascinating character.

There is some problems with this book. But I can't decide if they are big problems that would ruin the book for me or problems with Bond as a whole. With two of them, I have a feeling it's Bond that's the problem.

The first is David Oyelowo's reading of Trigger Mortis. Now, I liked it. I could tell the characters apart, David gave the characters depth. But I can understand some write-ups that I have read where they aren't not happy with the pacing of David's reading. At some point, he does reading very slowly and then, in high action scenes, his reading gets faster so the listener has to change how they listen to the story.

Another thing that true Bond fans might have issue is that Trigger Mortis does try once or twice to make Bond more human - a product of our time rather than a product of Ian Fleming's time. Bond has conversations with people about homosexuality (which at the time was illegal - Pussy Galore was a lesbian in Goldfinger but Bond "turned her" straight by the end of the book) and he is still racist at times. But then, there are moments Bond does act a tiny bit out of character. There is a moment when Bond, about to nearly kill someone, decide to let him live after the man pleads for his life, telling Bond about his family. Now, Bond is a killing mission - nothing matters but the mission - so showing mercy is hugely out of character for him. 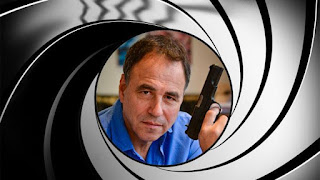 But my main issue - which is a huge thing I have with James Bond in general - is the way he treats women. We see him treating women badly time and time again in both the books and in the movies. He enjoys the chase, sleeps with them and then discards them without a moment's thought. And in any form of adventure (movie, book, etc), do we see him decide to be safe and use a condom? Of course, this is Bond!

But in Trigger Mortis, we have three "Bond Girls" (I am trying not to use that term. It's a bit degrading, isn't it?). We have Pussy Galore from Goldfinger, who Bond "turned" straight. She came back with him because she was in danger in New York. But the thrill was gone and, after she was in danger, she ends things with Bond after a few chapters. He wanted her gone for a while but she ends it, basically calling him out on being a coward when it comes to relationships. But, barring this, what exactly was the point of her being in this story? Was her appearance a nod to fans of the book series or was it to show us that Bond is a bit of a sexist pig? Whatever it was, her appearance was lacking and it would have been nice if she was more involved in the story as a whole because of the location of where the book ends. I thought she was going to be in the whole story, not for a few chapters... And with the other two, Logan Fairfax and, the main "Bond girl", Jeopardy Lane, Bond uses them and then dismisses them once their use is over. Logan leaves after she teaches him how to drive a Grand Prix car and Jeopardy... ok, that's spoiler territory but you can guess.

Sorry, that is a rant for a later date, me thinks.

But yes, Trigger Mortis. It was a love letter from a fan to the author and it was a lot of fun. I do hope Anthony Horowitz is asked to write another Bond novel.
Posted by Pewter Wolf at 07:30:00