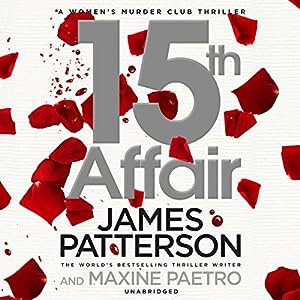 Let's start this month with a bit of a bang, shall we?

15th Affair is the fifteen volume in the Women's Murder Club series and it follows Detective Lindsay Boxer who is now juggling married life, being a mother and her career within Homicide within San Francisco Police Department. But life can change in an instant, as Lindsey knows.

When she is called to the Four Seasons Hotel, Lindsey is shocked at what she sees. A man in one hotel room, shot at close range with no form of ID on him. In the next room, a young man and woman are shot as well, but they are surrounded by high tech surveillance equipment. Who were they spying on? And with a house maid dead down the hall, the murders are connected. But how?

But before long, the case takes two shocking twists. How far will Lindsey and her fellow Women's Murder Club members will to go to the truth?

As you guys know if you follow my blog for a while, I have a weird love/hate relationship with James Patterson. I think this is because I read quite a bit of him when I was a teenager and after a while, I just had my fill and it's taken me quite a while to return to him, and even then, it's seems to be the Women's Murder Club that I'm happy to return to.

Which is nice as 3rd Degree, the third book in the Women's Murder Club series, was my first James Patterson novel.

As someone who is rediscovering this series, I enjoyed myself with this story. I was on the edge of my seat while listening and I sped through this. It was a fun thriller, a story I could have read while on the beach one summer's day.

But if you are a James Patterson fan, you might not be blown away with this plot. It's very much sticks to the James Patterson's brand with short, punchy chapters and a plot that will feel the same as other plots within this series or in any of his others. Plus, there is one tiny plot twist that might make readers go "That's one step too far..." It's like a repeat of the Yuki plot within Unlucky 13 (oh, that plot was a jump the shark moment, wasn't it?)

Another thing is that this story very much stays with Lindsey. This is Lindsey's story and the other members of the Women's Murder Club are very much supporting characters. With the story and the direction it takes, it makes sense to focus on Lindsey but I like the other characters and feel that a little more screen time wouldn't have hurt that much.

If you want a fun, fluffy thriller, this series is the place to go. Just don't expect it to get heavy and intense. That's not the James Patterson way.
Posted by Pewter Wolf at 07:30:00