Book Review - The Fate of the Tearling 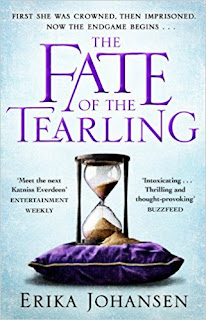 I did it! I read the whole Tearling trilogy! And I read and finished the third and final book in the series before I went on my holiday! HOORAY!!! And it took me just over 2 weeks to read (compared to however long the audiobook of Queen of the Tearling took me and two months for Invasion of the Tearling).

So, here we are. The third and final book in the trilogy and the one most book bloggers who have read this were going "NO! Don't do it, Andrew! It's a trap!" over...

It's been less than a year since Kelsea took the Tearling throne and already, she has become a powerful Queen. But with power comes danger and enemies, one of which is the Red Queen who, in the last book (Invasion) was on the verge of invading and easily conquering the Tearling until Kelsea made a huge sacrifice - she offered herself and her magical sapphires to the Red Queen to save the Tearling, leaving the head of her Guard, the Mace, as Regent till her hopeful return.

But the Mace isn't going to sit back and wait. He's going to rescue Kelsea and nothing will stop him...

And all the while, an enemy is slowly growing in power. An enemy that scare the Red Queen, and an enemy Kelsea has unleash onto the world. And this enemy isn't going to rest till it gets what it has long desired...

The fate of the Tearling is now on the line... and not everyone is going to be around to see the final outcome...

For three quarters of the book, this was solid! It felt stronger than Invasion and I was impressed on what this book was showing. But the last 20-ish percent of the book - oh boy. It's an ending you are going to love or hate. I am very much on the "meh" side - right in the middle. I saw it coming and went "Oh no... no, really? You want to go down this route? I hate this troupe so why are you doing this?" so had time to brace myself. And while I understand why this was the direction the series took (and it shouldn't be much of a shock for us - there were clues from Queen and it got more clue heavy in Invasion), I get everyone reaction of "This is a cop-out ending" because it is. It's a cheap "Get Out of Jail Free Card" trick that most readers don't like, because it really undermines the whole story.

I like this trilogy and I will be intrigued to see what Erika Johansen writes next. But the last 20-odd percent of Fate of the Tearling is going to be the thing that defines most readers thoughts on the series. But this series and this ending - you are either going to love it or loathe it.
Posted by Pewter Wolf at 07:30:00

Email ThisBlogThis!Share to TwitterShare to FacebookShare to Pinterest
Labels: Bantam Press, Books, Erika Johansen, GoodRead, reading, review, The Fate of the Tearling, The Queen of the Tearling, Transworld Publishers