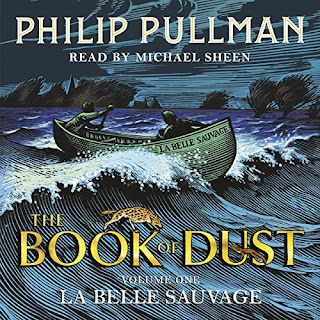 It’s been a long time coming, hasn’t it? With me finally, FINALLY, getting my rear in gear and reading/audiobooking La Belle Sauvage, seeing how much I love the His Dark Materials trilogy and bought this as soon as I could.

But I held off reading this. For the same reason I’m holding off watching the BBC/HBO adaption of the series - The Fear! I mean, we have been waiting for these FOR YEARS! What if, after all this waiting, they don’t live up to our exceptions?!

So, how/why did I decide to do it now? Well, the audiobook is the main reason. Plus, The Secret Commonwealth for another. OK, let me explain. The Secret Commonwealth has just come out in hardback and I would like to read that as Lyra is an adult in this and I want to return and see what’s happened to her and her daemon, Pan. Now, the audiobook. I returned an audiobook after an hour’s listening on Audible and they, very kindly, gave me a credit as a refund. So, I decided to grab this (as well as activate a Black Friday deal of getting an Audible Subscription with 4 months being only £3.99 [The offer is still going. I think it ends on Thursday 12th December aka UK General Election Day or Friday 13th, so go go! Just remember to cancel it before the price goes up to £7.99])

Anyway, La Belle Sauavge, the first volume in the Book of Dust series is a little different from what everyone was expecting. We thought this was going to follow after His Dark Materials. Nope. This takes place years BEFORE, when Lyra is only six months.

Malcolm Polstead and his daemon, Asta, lives in the pub in Oxford by the river Thames. His life is fairly ordinary, even uneventful. But this winter, the rain won’t stop. Rumours of a flood are everywhere, and Malcolm finds himself near the centre of a battle between religion, science and politics, when he goes to the priory across the river and discover they are looking after a small six month baby called Lyra, daughter of Lord Asriel...


I am so torn over this. Not because it’s bad. It isn’t. It is very, very good. But I don’t know if, on Goodreads, if I should give it four stars or five.

Ok, bear with me and let me explain.

I am a fan of His Dark Materials, so reading this felt like coming home, in the same way as me rereading Harry Potter or other series I love. Everything about this feels like coming home and feels so on point. The writing, the darkness (oh goodness, this book was DARK! Far more darker than I was expecting and am pretty sure most, if not all, readers saw the links between how the Nazi recruited children and the League of St Alexander and other horrifying connections), the complex characters (I’m sorry, but I thought Mrs Coulter and her Golden Monkey daemon was complex, meeting Bonneville and his hyena daemon was terrifying! If this gets turned into a TV series, Michael Sheen has to play him!). And speaking of Michael Sheen, his narration is perfection. This is rare in audiobooks. Only a few others are wonderful and become instant “I must pay attention to you”. 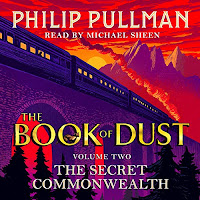 However, there is something that is stopping me going “This is a five star read!” and I know other people have said this. This is a starter book. It’s setting things up for the books later in the series. Yes, it explains several questions we had from His Dark Materials and it gives more depth to the world of babies and daemons. But it does feel like a set-up book, an introduction, very much how I feel about Northern Lights. Both are setting up the series and it’s only when we get the end that we are going to see why the first book was so important.

I know The Secret Commonwealth is set when Lyra is 20/21 and we do meet Malcolm again (if he’s 11 in La Belle Sauvage, he will be in his early to mid 30s) and see the fallout of some of the decisions he makes (Philip Pullman has said that some consequences will be felt instantly, others will take years to come to the forefront) so I’m intrigued to see what Philip Pullman does…

But I am very excited to return to this world with Secret Commonwealth. I’ll get the audiobook and will try and listen to it in the New Year (I’ve requested a good four/five audiobooks from my library and, sadly, they need my attention first [NetGalley Proofs am very behind on!]…)
Posted by Pewter Wolf at 07:30:00