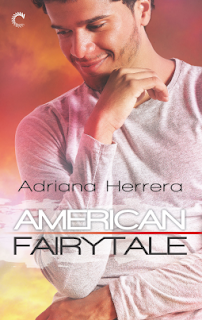 So, as you can see from the blog post title, this is a Self-Isolation read. Yes, I audiobooked this while in self-isolation due to Corona (the virus, not the beer). I finished Cassandra Clare’s Chain of Gold in self-isolation (though, at the time, I was holiday, using last few days of my work’s allocated holiday in 2019 financial year) but when I knew that I was on self-isolation, I knew I wanted to read and audiobook fun stuff. Fun, silly stories. Now more than ever, I wanted to read and audiobook stories that make me happy. They can be fun, silly, dark-as-heck, a reread, I don’t care but I want stories that make me smile and, hopefully, make you go “Oh, this sounds like something I would like.”

Yes, I know that’s very much what the Pewter Wolf is about for past few years, but you know what I mean… 2020 has been a dark year, let’s lighten it up a bit… Wow, that sounds like that mannequin moment from the first series of BBC’s Miranda…

But I had American Fairytale on my NetGalley for a while as I saw this title on NetGalley a year or so and I went “Ooooh!” when I read the blurb.

New York social worker Camilo (Milo to his friends) has always dreamed of his own happily-ever-after. But, he lives in the real world and knows that kind of ending doesn’t exist. Men who are too good to be true, usually are. So, when Milo does something drunk and reckless one night and has an unforgettable hookup with a mysterious stranger at a gala his boss had to pull out of, he doesn’t think anything about it. Till the mysterious stranger walks into his office that Monday morning and turns out to be Thomas Hughes, the wealthy donor who is backing Milo’s agency’s funding for their next project.

As the two try (and fail) to keep business and pleasure seperate, the two have to figure their issues out: For Milo, it means learning to let someone take care of him for a change and, for Tom, it means that money can’t solve every problem. But can these two get over their issues to get their happily ever after?


So… for self-isolation, this was a nice, fun story, but there’s a bit of weight to it. It’s not perfect, let me make that clear from the get-go, but this was fun.

Where to start? The positive or the negative…?

This was a sweet and very fairy tale-esque romance. It worked for what I needed it to be: a quick romantic story to listen to while self-isolating and playing Animal Crossing. The characters were diverse - Milo is Cuban-Jamaican, his mother is Cubanita, his best friend is Japanese-Jamaican and his other friends are people of colour, and Tom is white-passing Latinx and his friends are people of colour (and all Milo’s and Thomas’s friends are fabulous!I loved them so much!) . We have LGBT+ rep (it’s a gay romance, of course there is, but with secondary characters as well) and this book has weight as it touches on mental health, domestic abuse and the long, painful road of healing a victim of domestic abuse goes through after they’ve left the relationship.

The romance is sweet as it’s very much lust then love at first sight, and due to this story having dual POV, we see both sides of the romance and glimpse into each other’s lives before the other finds out. With Milo, it’s his mother’ depression and coming to terms with her past and with Thomas, it’s his young daughter, his ex and his friends.

As this is a romance novel, there is conflict within the romance, and it wasn’t what I was expecting. It comes down to money and trust. Due to situations in his and his mother’s past, Milo has to do everything himself and don’t feel like he can rely on other people and Thomas, wanting to help, throws money at the problem, even though Milo has said no.

So, why the negative? Well, it’s more that fact that, when in the story, you get sweep away with it and, at the current moment, this is very much needed. And yet, writing this write-up up, I see little problems.

We have an age group (Thomas is a “daddy” - 40ish - while Milo is in his mid/late 20s) and yet, some situations feel very out of place for their ages. Thomas, who grew up with nothing, should know better that money can’t solve everything, no matter how well meaning it is, and Milo doesn’t practice what he preaches: that asking for help isn’t a sign of weakness.

Plus, Thomas’s history. I’ve read one or two reviews asking what was the point of Thomas’s ex and his young toddler daughter. I get why: it shows Thomas had a life before Milo and I like this, but I kinda wish more was done with them. Now I think about it, if Thomas’s ex and daughter were edited out of the story, would we have noticed?

And yet, it did what it said on the tin. We had a romance, a couple that we knew would get together and wanted to get together. We understood why they did what they did and, at the same time, wanted to bang their heads together. And we had some X-rated scenes that made me glad I didn’t listen or read this at work, and some sweet moments.

This was a nice read, perfect for self-isolation, distracting self from the news or on a beach in the height of summer.
Posted by Pewter Wolf at 08:00:00