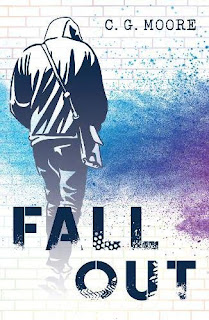 BLOG TOUR TIME! And it's a good'un, I promise!

I am thrilled to be a stop on Fall Out, C.G. Moore debut novel! I read this a few months back during self-isolation (review for that is here) and I devoured this book, so it was a no-brainer when I was asked to be involved in this tour!

As Cal is pushed closer and closer to his limit, can he rely on his family and friends to save him from having a meltdown or has he cut himself off too far from them, or himself, to save him?

Now, before I hand it over to C.G to chat about writing while listening to music and some song choices he listened to while writing Fall Out, I want to thank C.G. for finding time to write this post for this tour and for Hazel at UCLan Publishing for chatting to me about this tour!

If you wanna chat to C.G, you can visit him on Twitter at @YAfictionados! Now, over to you, C.G., and get your headphones on!

It’s an ongoing debate among authors whether they listen to music while they write or not. I’ve always been able to write while listening to music, but I have to carefully curate what I listen to or it will take me outside the scene and the story.

As a general rule, while I’m both writing and editing, I listen to Lana Del Rey on shuffle. I’m the biggest Lana fan; she has this hypnotic quality that lulls me into a mental space where I lose myself to the melody and carve out a creative space within the music. I don’t hear the words of the song; I hear the words of my protagonist and I’m better able to approach the obstacles they face and the interactions they have with other characters in my world.

Ride is probably my all-time favourite Lana song. Throughout Fall Out, I must have listened to it 3,000+ times. It’s such a melodic masterpiece that doesn’t interfere with my world-building. In fact, when I’m working in a noisy café, it’s my gateway to escape into my own world. I don’t have my own writing office or fixed space. I can’t write at home as I associate it with a place of leisure and relaxation rather than work. Without You and Ultraviolence also played their part in helping me build my own bubble when I was trying to write in noisy cafes.

When it comes to the more melancholic and darker scenes, I need to tap into my own emotions. This isn’t something I’ve always been able to do on cue, but there are several songs that echo parts of my life where I can live in some of the darker moments of my life and effectively channel that emotion into the story, so the reader feels the pain and the fear and the crushing sadness that Cal experiences.

Praying by Kesha reminds me of one of the darker moments in my life and when thinking around the early scenes where Cal finds himself dating – particularly when he’s dating Al – it was easy to channel the emotion in the aftermath. Although that scene isn’t autobiographical, I was able to access the emotion needed to write a scene that resonated with readers on a mental and emotional level. My Immortal by Evanescence was crucial during the scenes with Peggy. It echoes a lot of the tragedy that affected myself and my own family; adolescence spent in hospitals, my grandad passing away and coping with chronic illness and likewise, Stay by the Shakespeare's Sisters echoed this too.

When listening to Yours by Ella Henderson and There You’ll Be by Faith Hill, I was anchored in memories of my own heartbreak and it was easy to extend that emotion into those scenes where Cal tries to find love in other guys. The most important thing for me is that the music echoes the emotion of my character and the pain, anger, fear or sadness I’ve experience in my own life. If I just need to clear my head, I shuffle Lana Del Rey’s complete playlist on Spotify.
Posted by Pewter Wolf at 08:00:00