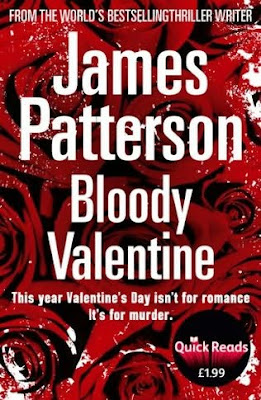 Before I go anywhere with this quicky of a review, I want to state something about James Patterson and me. I kinda have a love/hate relationship with him. I used to really like this books. I read several of his Women's Murder Club and one or two of his Alex Cross books. But, after I read Mary Mary for a quick holiday read, I fell out of favour with him. I began to find his books very repetitive (if it aren't broke, don't fix it), and I was always questioning how much James Patterson wrote when he co-authored a book with someone (who would always appear on the book cover in a much smaller font). Then, I read Cross and I couldn't even get halfway through. It was such hard work!

So, when I saw Bloody Valentine in my local WHSmiths and read the back, I thought I would give him another try...

So, the story. Jack Barnes and his second wife, Zee, are very much in love. However, their Valentine Day's plans are torn apart by a violent, possible evil, murder. Who would do something so evil? And why? Is it someone who lives in the block of flats Jack's own? Is the murderer one of Jack's relative? And whoever it is, why would they do such an evil, twisted act?

This is very much a James Patterson novel. It doesn't require much thinking over – it's very much crime-lit for the brain. The chapters aare short and they always end of a cliffhanger. And for a short story, it's ok.

But it's very much a James Patterson story in my eyes. There was no substance to it and I didn't relate to any of the characters. And as for the murder/s themselves, I have some doubts over that myself. If it was the reason that I read, then why do go to the extremes they did? Just kill the person, not do what they did to the person body...! IT MAKES NO SENSE!

So, if you want a fast crime-lit book, this might be for you. As for me, it looks like I might still be in my “Love/Hate” relationship with James Patterson. Sorry.
Posted by Pewter Wolf at 13:42:00