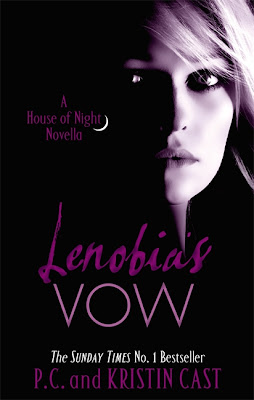 I've only read two House of Night novels - the first two - but I have read the previous Novella, Dragon's Oath, and I quite like that. I think I prefer the idea of the novellas better as I like getting more info about characters.

And here, the second House of Night novella follows Lenobia before she became a vampyre as she, pretending to be her dead half-sister, set sails to the New World of America. But a bishop, skilled in the dark arts, is also on the ship making the jounrey. And he has an eye for beautiful young women, meaning that Lenobia has to hide. On one of her rare early morning walks, she discovers the ship's stables, where a handsome young man, Martin, and his horses. But will Lenobia make it to America without the bishop discovering her? And what would happen if he does?

Now, as I'm not a House of Night fan, but I do quite like this. It's a fast read that most fans of the series will be jumping up and down to read this!

And the drawings used at the start of each chapters are, like in Dragon's Oath, very lovely!

According to my research searching, this is to fill the months before the next House of Night book, Hidden (the tenth book in the series that's out later in the year) & it has been confirmed that there will be two novellas, Neferet's Curse and the fourth (rumoured to be released between the penultimate and finale books in the series [book 11 & 12]) about the character, Kalona.