GoodRead - Our Kind of Traitor (Audiobook) 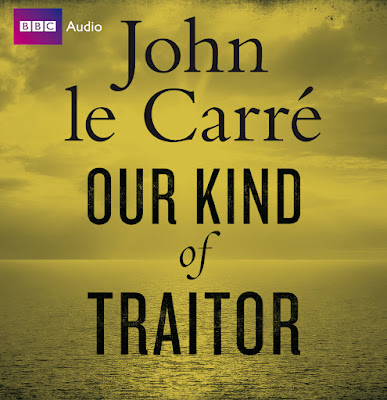 I got this for free with the Guardian newspaper. Because it was free! No other reason! It was free and unabridged so I got it. I never listened to it till recently when I started temping and I was allowed to use my iPod (hence my recent addiction to The Archers!)

Young couple Perry and Gail go to a tennis holiday in Antigua. There, they meet and play against a Russian called Dima, who they later discover is "the world's number one money launderer" (according to Dima himself). What happens on the holiday effects both Perry and Gail and they must talk to British Intelligence...

I'm not going to lie to you. I have never read any of John le Carre's books nor have I watched any TV shows/films based on his works. So I had no idea what to expect. What I got was... well... not my cup of tea. It was dull at times!

I liked the fact that this showed that spying wasn't all excitement and explosions as we see or read about in James Bond or Jason Bourne. It was nice to read that British Intelligence is quite paperwork-driven.

However, this book fell flat! I had trouble liking the main characters. Several of them got on my nerves (for example, Dima spoke about himself in the third person, kept saying "I am Dima. The world's number one money launderer!" or "I love you!". I found these HIGHLY irritating!).

And the ending - WHAT THE HELL?! That wasn't an ending! That felt like the author just couldn't be bother to write any more so stopped. He gave no closure to any of the characters and I found it incredible hard to like the story once I heard the ending!

The reader - Michael Jayston - was good and kept the story going, but I'm sorry. I just didn't like this as much as I thought I would and I feel a bit let down!
Posted by Pewter Wolf at 07:00:00