GoodRead - The Pirates! In An Adventure With Moby Dick 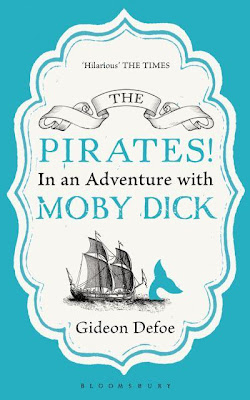 The Pirate Captain can't seem to keep out of trouble, can he? After he splashes out on the fancy new ship, the Lovely Emma, he finds himself spending six thousand doubloons he doesn't have. In debt to the beautiful but deadly Cutlass Liz, who will happily cut them easily in two, he and his crew must get the cash. And fast!

Along the way in their desperate race to find the cash before time runs out (Cutlass Liz gave them an hourglass, filled with the sands that are actually grounded-up bones from pirates who didn't pay on time), the Pirate Captain and his crew go from Nantucket, Las Vegas and then in search of a mythical white whale...

Now, I really have high hopes for this, and though it wasn't up to par with Scientists (am going to use shorthand, if that alright), it is just as mad, bonkers and funny as its predecessor. (Although from chapter 11 onwards, I started see Black Bellamy as Jeremy Piven... not sure if Black Bellamy is meant to be a hottie, but whoever rocks your boat... [just realised, after quick research, that he's the voice of Black Bellamy in the movie. How did I not know that?])

And, this series was written for adults in mind... Apparently. But you guys will get the stupidness of the Pirate Captain!