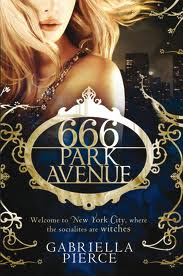 This book has caused a small stir in the USA. This book served as the inspiration to ABC's new supernatural drama, which will be on air in the States in September [EDIT: the lovely Emily from Corsair PR confirmed that ITV2 has the UK rights to this show. YEAH! (though there were several moments where I thought she meant ITV3...)]. So, when the UK publisher, Canvas, saw my tweets over the show & books and asked if I wanted to read it, I said yes and waited for the perfect time to fall into this world.

So, what is this book about, I hear you ask? And will it be the same as the TV show? I can answer the latter now: no, it won't. The two are very different creatures!

The book follows Jane, who is swept off her feet after meeting Malcolm Doran. When he proposes to her within a month of their meeting, Jane simply can't believe her luck. So when her grandmother suddenly dies, Jane's life is thrown into chaos when she discovers a ring and a note, both for her. The note tells Jane the truth: she's a witch.

But running away from her past won't solve her witchy problem. As soon as she gets to New York and meet her new soon-to-be-in-laws, the Dorans, Janes suddenly realises that her fairytale isn't a fairytale at all...

So, what can I say about this book? It's a bit of a guilty pleasure read, if I'm to be honest with you. A summer read (so bad time to review it, seeing as it's the end of the Summer Hols!). It felt a lot like the Blue Bloods series by Melissa de la Cruz. Expect this is for definitely for older teens/adults as there were several sex scenes (though no swearing, which I'm slightly surprised over).

Now, saying that it's a guilty pleasure, this book does have some faults. The sex was one of them. At things, these scenes felt thrown in at the last minute. No real reason at all. There was one scene that I'm still "But why?!" over. Another problem that I think some of you guys are going to have is, even though this is a light read, it lacks substance.

I think, if you're looking for a light, frothy book about witches (oops! Did I spoil the secret?) and the sex scenes don't bother you, this is right up your street. And with the sequel, The Dark Glamour, coming out in the UK next month, you will be in for a treat.