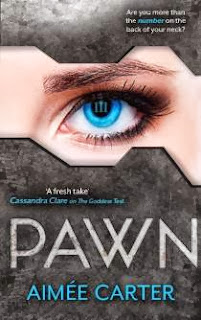 You will have to forgive me if my review on Pawn isn' up to my normal standards. I read this back at the start of October (thank you NetGalley) and the UK publishers, Mira Ink, asked if I could have it close to the UK publication date (January 2014) rather than the US release date (November 2013) so I decided to pop here - best of both worlds! And because I am writing this a few weeks after reading this, you will have to forgive me if I forget details so... yeah...

In this, the first book in the Blackcoat Rebellion series, we are thrown into a dystopian USA where, at the age of seventeen, you take a test and this defines your grade in life. For Kitty Doe, she gets the grade of III and she's plans to escape the life of misery that is thrown upon her. So when she gets the chance to become a VII, the highest grade you can become - the same as the Hart family, who rule the USA, Kitty takes it, not realising what would happen to her next.

But as a pawn in this twisted game of politics and family loyalty, Kitty must step carefully for her life isn't the only life on the line...

I really enjoyed reading this. This was one of the easiest dystopian novels I read in a while that I instantly sank into and read late into the night. It was very addictive. There were elements of The Selection by Kiera Cass to it (but Aimee Carter actually writes these elements MUCH BETTER than Kiera Cass) and there was something about it that remembered me of Under The Never Sky by Veronica Rossi, but I can't put my finger on what, though. 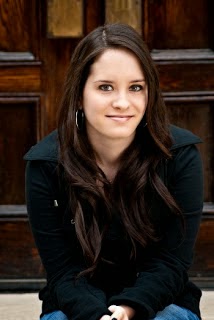 And this novel had twists! It's a very twisty novel. In the first, say, 50-60% of the book, you are understanding the world Kitty lives in and the world she is suddenly thrust into. But then, just when you begin to understand it, Aimee then pulls the rug from under her readers with the amount of twists. With every twists, you go "Whoa! I did not see that coming!" and she only gives you a few chapters to recover before the next twist is revealed.

I need to know what happens next. I need the sequel because of that ending. That last reveal...

So, dear readers, if you are a fan of The Selection and you want some darker or you're a fan of Under the Never Sky, may I suggest this read...