GoodRead - Under The Paw 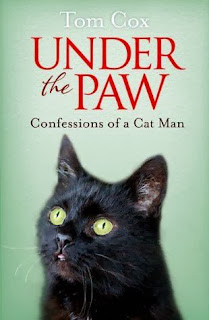 I have been following the twitter accounts Why My Cat Is Sad (@MySadCat) and Why My Cat is Smug (@MySmugCat) for quite awhile so I knew I wanted to read one of the books written by the man in charge of the twitter, Tom Cox, for a while. So when the first and second books, Under the Paw and Talk To The Tail, was made £1.59 each, I knew I would buy them both.

On the surface, Tom Cox looks like a normal guy. Expect for one thing. He's a cat person. In a big way. So when he meets his soon-to-be wife, he gives up his life as a journalist for NME, moves to Norfolk and, within a matter of years, finds himself owning several cats. Well, at one point, seven. Including The Bear, a cat that is "painfully sensitive" but could very easily be an evil genius...

If you know me or follow the blog/Twitter (@PewterWolf13, by the way), I am a bit of a cat person myself so seeing this, it was a no brainer that I was going to read it. A no-brainer. And I thought I was going to enjoy it SO MUCH! I mean, what's not to love about cats?

However (yes, there's a however), for a short book (it's around 250-odd pages), it felt like a drag to read. Sometimes, I whizzed through it but, most times, it DRAGGED! Maybe it's because I have owned cats in the past so when Tom chatted about something, I would have gone "Oh, my old cat use to do that".

I think my problem with this is that I expected it to be much funnier than it was. I had a high expectations.

But I did like it. But I don't think I will rush quickly to read the next read.