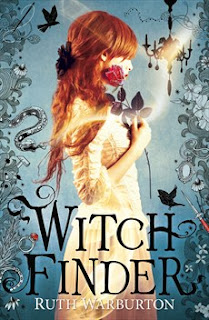 Another day, another NetGalley read! I am going to try and read some of my NetGalley this month so I have some control over my NetGalley requests (and my twitchy "request" finger!). And with me deciding that I want to have my last review of the year sometime within the week of the 16th December (so no worrying over reviews during Christmas/New Year weeks).

So, Witch Finder. In London 1880, Luke is trying to join Malleus Maleficorum, brotherhood that are bound to hunt and kill witches. To join, Luke must pick a random name from the Book of Witches and kill them. Failure means his own death. When Luke chooses the name of Rosa Greenwood, he doesn't realise it would be more difficult than he first thought...

And as for Rosa, life as a witch isn't as simple. Her mother and brother see her as property, a means to gather money and a position of employment, rather than a young woman and one of her brother's friends is looking at her, ready to take her as a wife. But if he does ask her for marry, what will Rosa do?

If I am completely honest with you, I am in two minds over this read.

It was an easy read and sets things nicely up for the series that is to come. I enjoyed reading about Rosa and her situation.

However, I do have issues. Like I said, this is the first book in a series, so it suffered from "First Book Syndrome". Where a lot of things had to be set up. So, when you get to the end, some things are neatly tied up and yet, others aren't. And for me, the story lines that were left dangling, I didn't care as much about as much as I should.

My second little issue was I wanted more description. There were times I wished there was more information. This is set in London 1880, so there were things that needed more description. But at times, it felt a bit slack. But I can forgive this as I was enjoying the story so that's why this isn't as big an issue as it could have been.

The final issue I had was the main character, Luke. It took me ages before I warmed to him, whereas with Rosa, I liked her from within a few pages. I didn't really care for him, or his back story. I think, with him, I felt like I had read him before...

So, this book was a mix of good and bad. I would consider reading the sequel (this is the first book in a series, remember?). And I do have the first book in the author's other Witch series (the A Witch in Winter trilogy) so I am going to read more from this author, but maybe this book came at the wrong time (I'm still recovering from the whole Allegiant affair)...
Posted by Pewter Wolf at 07:00:00