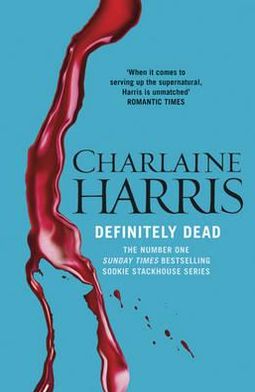 I know April is meant to be my NetGalley month. I know this, but I thought I was doing quite well to improve my "Feedback to Approval Ratio" (I increased it by over 10% - Yes, I know I need to increase it a bit more before I get it to a level I am much more happy with but over 10% is better than a poke in the eye!). So, I thought I would treat myself with a read that I bought. And for some reason, this called to me.

Sookie Stackhouse has gone through the mill in the past few months. And the last thing she wants to deal with is the death of her cousin. Her cousin who was a vampire and a favourite to the Queen of Mississippi. With Hadley now "definitely dead", Sookie has to deal with Hadlet's apartment in New Orleans'.

But Sookie's life is spiraling. Her life is on the line and it could be anyone close to her who's behind it. And when a few truths are revealed, can Sookie be brave enough to keep going to save herself...?

Ok, as you probably know, I am not a real fan of this series. I dip in and out, and with this book, it covers and makes a few story lines that were started in both books 4 and 5 (Dead To The World [which I audiobooked - review here] and Dead As A Doornail [which I haven't read]) and ties them up while getting things ready for future books (mainly All Together Dead and From Dead To Worse). This is a series you have to read to get and understand. But as I have a vague idea of some of the series (I still don't know what happened within the series's finale, Dead Ever After [is it wrong I REALLY want to read it and find out...?]

And this is a good book. I did enjoy it - don't get me wrong, I did like it. Maybe not as much as Dead To The World, but I liked the fact that this wrapped up the whole Debbie Pelt storyline, which Dead To The World kicked started. And I liked the fact that this book took Sookie out of Bon Temps. It's good to see how the supernatural world is effecting the rest of the world. It's building on the world's mythology as well, which is something I liked. In Dead To The World, we were introduced to the idea of weres - werewolves, werefoxes, werepanthers. And here, we have a character which was a weretiger.

Speaking of the weretiger, Quinn, I don't like him. I'm sorry, I know he;s in the series for a good few books and he does become Sookie's boyfriend (well, he was in this book), but I just disliked him. I think it's because of two reasons: the fact he called Sookie "babe" from the first date onwards - SHUDDERS! Sorry, but every time Quinn said that word to Sookie, it really grated on me!

The second was his attitude. There's something about his attitude that really annoyed me. Was it because he was a weretiger and that carried over or the fact there were times I felt that he only wanted Sookie to be a sex-toy rather than be a girlfriend.

My only other thing is pacing. From what I was expecting, I thought we were going to be in New Orleans quite quickly, but we didn't get there till half way through the book. I forgot that this series likes taking it's time (you know I like my thrillers fast. I blame Kathy Reichs) and it suits Sookie, but I need to remember this next time...

Oh yeah, this is an adult read as there is swearing and one sexy scene (though I skimmed that part because I honestly thought it was something else but nope!).

I did like it, but not as much as I hoped. Maybe I should really read the series and stop jumping here/there/everywhere. But I am curious over Dead Ever After, even though I have been warned against it... (go to book 10 then stop, is there advice for me!). But I do want to read another book in this series... but I want the next book to be quick in pace...

Oh, PS. If you can get your hands on the short Sookie Stackhouse story, One Word Answer (you should find this in A Touch of Dead [review here], you might want to read that first before reading this book as this kinda helps with some of the details...
Posted by Pewter Wolf at 07:00:00