Book Review - The Invasion of the Tearling 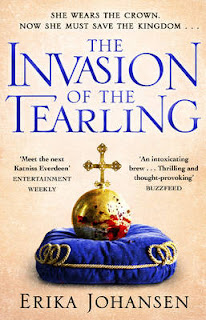 Two months. This book took me TWO MONTHS to read. TWO MONTHS, READERS!!! It didn't help that, for the first month, I was reading this as a side project as I wanted to read this series but I wasn't ready to return fully into this world...

But power is a double-edged sword... When she first came to the capital, she put an end to the horrible slave trade (this was back in book 1). But doing this defied the Red Queen, ruler of neighbouring country who rules with dark magic and fury.

With her armies ready to invade the Tearling, Kelsea has to find a way to protect her people. But with her beginning to get visions of a woman from before the Crossing and the walls of danger and mistrust growing around her, Kelsea and the Tearling's time are running out...

Right... ok... Writing this is going to be difficult so bear with me while I write my thoughts and feelings about this.

Because this book took me so long to read (TWO MONTHS!), I might be misremembering stuff and feelings but this, like the first book (review for The Queen of the Tearling is here), is an interesting beast of a book. It's interesting and, when it finds its footing, is gripping and complex (I enjoyed the complex twists and ideas this series is trying to lay out).

But there were moments where the book did lag and you flinched at certain issues the book tackles (some of these issues are triggers such as sexual assault, self-harm and others). Remember, this trilogy is found in the adult fantasy/sci-fi section rather than YA, so I understand this is more for an adult audience therefore tackles darker themes, but when it is sold as having huge crossover appeal, it would be useful to see if there was something to warn readers about trigger warnings (but this is a topic for a later date, me thinks...).

Don't get me wrong. I did like this book and I do plan to read the final book in the trilogy, The Fate of the Tearling, by the end of the year. I bought a paperback copy, against most of the book bloggers and vloggers who have read this and gone "DON'T DO IT! THE THIRD BOOK IN THE TRILOGY SUCKS!!!!". But I didn't seem to enjoy myself with Invasion as much as I did with Queen of the Tearling.

Maybe I'm being a little hard of this book. The writing is solid, the characters are complex and interesting to read, the political and religious intrigue was good and I always liked it when I read this and went "How is this going to pan out?". The same goes with characters relationship - I adore Kelsea's relationship with the Mace, and we got to spend more time with Kelsea and Pen. And with Kelsey's visions of the Pre-Crossing, most of the time, it made gripping reading. Most of this book is a solid fantasy read.

But, it didn't really hit the same heights as The Queen of the Tearling. It just missed it. There were times when situations and issues were put forward, but were either weren't resolved (I know, this is a second book in the series so foreshadowing, but some of these moments felt disjointed) or they were resolved far too quickly and out of character (the self-harm storyline is a good example for this).

While a solid read, Invasion of the Tearling didn't hit the same heights as its predecessor. I hold some hope that Fate of the Tearling will reclaim the wow factor, but am going to keep my hopes low due to everyone's reactions...
Posted by Pewter Wolf at 07:30:00