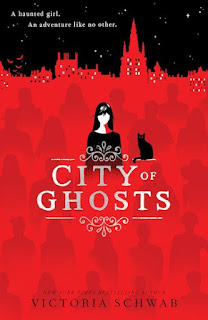 Curveball alert!!! A middle grade! And via audiobook even though I have a physical copy on my TBR shelves! Plus, at a time when I’m not sure what kind of book blogger I am, this comes as a real sidestep.

So, I bought this book MONTHS ago after hearing everyone RAVE about Victoria Schwab (or V.E. Schwab for her adult novels) other novels. You guys seem to really love her Darker Shades of Magic and Vicious series. I think I got Vicious on my kindle during a Kindle Sale so might read that in the future (not sure when), but when I first heard of this, this caught my attention. A middle grade ghost story set in Scotland - sign me up.

But then, I never read it. I never felt in the mood or the right frame of mind, and it was only when I saw the audiobook on the BorrowBow app (via Essex Libraries as am trying to save money and I cancelled my Audible. I know, what was I thinking?!) did I go “Ok, am in the mood for something fun”.

Cassidy Blake can see ghosts. She can step through the Veil between the living and the dead. And no one knows this about Cassidy expect her best friend Jacob. Who’s a ghost himself and can read her thoughts.

When Cassidy’s parents - two famous authors who investigate the paranormal - are offered a chance to host a TV show, showcasing the world’s most haunted cities, the family (two adults, one child, one ghost and one ticked-off cat) head off to Edinburgh, a city of ghosts. Including one with black hair, a red cloak and the ability to steal children away…

The Raven in Red is watching, and she watching Cassidy with great interest…


This is a very solid introduction book into a middle grade series. It was fun, fast-paced, creepy and elements of humour. If this was published when I was the right age, I would have devoured it and hunger for the next book in the series, Tunnel of Bones. In fact, I am very tempted to read book 2 in the series to see what Victoria does next.

However, there are a few negative things I want to raise or question. I know, I’m not the target audience as this is a middle grade book and I am thirty-something year old gay guy, but I want to point things out.

The first little thing is character development. Yes, I know this is the first in a series so character development will happen over the course of the series (however long the series will be), but it’s kinda flat. Cassidy likes Harry Potter (she makes reference to this several times throughout the story and sometime, the references work and other times, they were annoying), does photography and… that’s kinda it. Characters need to be fleshed out more, and they will as the series goes, but more could have been done. 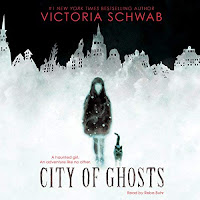 Second little thing is Grim. Grim is the ticked-off cat I mentioned earlier. And Grim, you think, is important to the story. He’s on the UK and the US covers, so you think he will be important to the book. Nope. Not important in any way, whatsoever. So, unless he has a big role to the play later down the series line, I do not understand why the cat is with them as the family travel the world. Plus, if a pet is going from the US into the UK, doesn’t it need to go into quarantine?

But the main thing I have problem with is that I can’t help feeling that I have read/seen this plot before. Main character near dies. Main character starts to see ghosts. Main character becomes best friends with a ghost. A scary ghost comes onto the scene and wants to do harm. Main character and ghost bestie must find way to stop scary ghost. This plot has been done before multiply times and, while it’s ok to start a series using this plot, I fear that this is going to be the plot from the next few books in the series, and that’s not going to work as readers might get bored over this format. Something new and slightly complex needs to be added as the readers and character grow older.

Ok, I know I am nit-picking. I know that, if I was the right age to read this, I would devour this book and hunger for the sequel (which, as I said before, I am very tempted to read as this was fun), but I am a little worried that if this plot is repeated in the next few books without adding anything new or mixing it up a little, readers might get bored. But, I have heard rumours that some people have read the sequel, Tunnels of Bones, and have spoke very positively over it so I have faith.
Posted by Pewter Wolf at 08:00:00