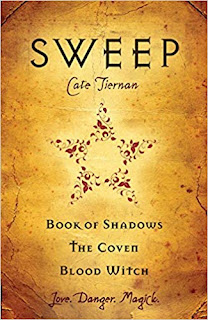 My second #re3 (or is my second, third and fourth? You see why in a second) of 2019 and it’s a bind-up of the first three novels (and I use that word loosely) within the Sweep series. Now, this is a bind-up on the first few books in the series, hence me wondering if this is my second reread or my second, third and fourth rereads (I’m going with the latter) and if you guys in the UK aren’t sure if you heard this series, don’t worry. This series was first published in the UK back in 2001 under the series name Wicca (though most people I know call this series Sweep).

Am trying to figure out how to talk about this as to me, these are three short novels/novellas (the longest instalment - Blood Witch - is 202 pages and the previous two are around 170 pages). Ok, let’s do the basics. Morgan Rowlands is an ordinary girl in the small New York state town of Widow’s Vale. She has a loving family, great friends - till Cal and his mother moves to town. Cal becomes the centre of attention and invites several students to a house warming party - including Morgan and best friend, Bree. Expect this house warming party ends with Cal revealing he and his family study Wiccan and he invites his peer to do a circle to celebrate Mabon. Morgan and Bree start and Morgan slowly begins to realise that she has a connection to Wicca, and the more her connection to Wicca grows, the closer she grows to Cal even though Bree has fallen for him…

But where will Morgan’s newfound connection to Witchcraft take her?


Ok, this is a reread and I only read up to book three in the series, but I remember devouring these books (even though the UK covers are… well… I’ll show you!) and I’m not sure what made me decide I fancy rereading these, but am kinda glad I did as they were a perfect summer beach read. They are light, easy to read stories. They are a bit of what I would say is a candy-floss read - addictive to read and yet nothing too heavy. Due to this and the size of the font and each instalment, I could quite easy say I could read this by the pool within a day if left to my devices.

Now, I do have one or two things I want to talk about. I might not be the bets person to point these out but I want to put them out there.

As I was reading this volume with all the instalments, I couldn’t help thinking that these instalments were quite short and fast and felt, at times, like chapters or episodes in a TV show. I researched a little and realised that this series was connected to Alloy Enterainment, the people behind Pretty Little Liars, Vampire Diaries, Gossip Girl, The Secret Circle and The 100. With this in mind, it makes sense to me that I made the connect of “This could work as a TV show similar to Vampire Diaries or Pretty Little Liars”. When this was being created, this could have been in mind for several people within the book packaging company.

The second thing I want to mention is that I can’t escape the feeling that this hasn’t aged well. Ok, I get that this was first published in the early 2000, when YA was beginning to find its feet. But you can tell this was written and published when YA was beginning to find its voice (remember, Twilight by Stephenie Meyer wasn’t published till 2005) and trying to fill the void between the releases of Harry Potter and the Goblet of Fire (2000) and Harry Potter and the Order of the Phoenix (2003). Some of the troupes and characters attitudes are outdated - and I will given an example in my next paragraph. 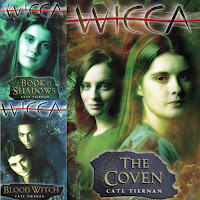 The third and final thing I want to talk about is Cal, the main romantic lead in these three books. I remember when I first read these that I got caught up in the romance. I got swept along with it, very much in the same way I do with Bella’s and Edward’s romance in Twilight. And, similar to Twilight, when you take a step back and look at the male leads, you notice that their behaviour is a little disturbing. A good example of this is a scene in Book of Shadow. After the characters do a circle (their second, I believe), they decide to skinny dip in Cal’s swimming pool. Morgan doesn’t want to do it and says no. Cal asks and, when she refuses to change her mind, walks out of the pools, picks her up and carries her into the pool, while she is fully clothed and still saying no. He ignores her contest and, if I read that in an up-to-date novel, I would expect someone to call Cal out of his behaviour but no one does. Not even Morgan’s best friend, Bree. Teens now are more vocal on issues, so the fact that this happened and not one person thought what Cal was doing was wrong is very worrying. Plus, I can’t help but feel that, reading this as a thirty-something, that Cal is quite emotionally manipulative. Maybe this is going to be addressed in the next volume, but I can’t help wondering why male romantic leads in early 2000 teen fiction have unhealthy traits.

So, am I going to get the second bind-up volume of Sweep, which will have books 4, 5 and 6 (I believe the titles of these are Dark Magick, Awakening and Spellbound)? I think I will. Now, I stopped reading this series at book 3 for some reason so, if I do continue forward, I will be entering new territory so will be intrigued/nervous to see what’s going to happen next… But if I do decide to read on, I think I will read this bind-up in a similar way to how I plan to read my Modern Faerie Tales by Holly Black and Chrestomanci series by Diana Wynne Jones, which is read one novel at a time…
Posted by Pewter Wolf at 08:00:00