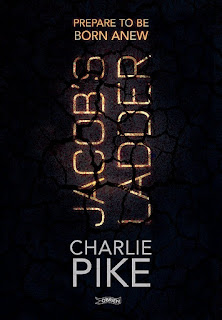 I have an extract for you guys! It's not much of a curveball like the last few extracts I have, but I still think you guys are going to devour it, nevertheless. An environmental dystopian, Jacob's Ladder by Charlie Pike.

Earth is dying. The year is 2202 and the sun has scorched the planet. Leon is a member of the True Path warrior culture and is preparing for his Rising. But when he takes his test - to kill in cold blood - Leon freezes. Now, to redeem himself, he and his resourceful servant, Mathra, must travel to find the fifth and final message from the Saviours...

Before I hand you guys over to the extract, I just want to thank Francesca from Francesca Eden PR for asking if I wanted to share an extract and getting me intrigued to say "Hell yeah". Now, if you want to know more information about Jacob's Ladder, you can check out O'Brien Press and Book Depository.

Now, onto the extract!

I feel my way down onto the first step. The cold air touches my ankles. From below comes a damp chill and the smell of rotten wood and stale, recycled air. The little light from the open door reveals a narrow round tunnel lined with pipes and steel drums.
“What do you see?” says Umut.
“Nothing,” I say.
The smell is bad, but mercifully the worm calls are muffled here. I creep down the rest of the steps and splash into several inches of foul water. My arrival sends small things scuttling away with tiny, muted cries. One of them latches onto my foot. A rodent claw prods my skin a moment and then it disappears with a plop into the water.
Umut moves up close behind me, his knife brushing against my shirt. The others follow with less enthusiasm, grumbling about the smell. The air feels damp and stagnant. An oily film has already formed on my skin.
“Bad place, Doru Yol,” says Umut. “Lucky it’s too dark to see, huh?”
His voice travels through the depths of chill air setting off faint, distant clanks where it makes contact with walls, steel, water - miles of it, by the sound - before it finally goes out of hearing. When everyone is down the Leggies light their two oil lamps. They only seem to emphasise how vast the dark is down here. There is no visible end to the tunnel either in front or behind us, though a gentle movement in the air suggests an opening, or perhaps a vent, some way ahead. A ledge runs along the walls on both sides but it is too narrow for us to climb up out of the swamp we are standing in.
“How is this the way in to the Colina?” says someone near the back of the group.
Ertughral answers him with a long string of foul sounding Turkish.
We are off the street, away from the worm brood. I at least feel safer down here. Umut gives me a shove between my shoulder blades.
“Hadi,” he says, “Go on.”
The dark licks at our little halos of wavering light. We wade through the knee-high scum in a tense silence. Unseen life scurries and scratches all around. At regular intervals other tunnels connect with this one, and the air from them is no better. Steel tubes and boxes in the ceiling make soft ticks and clangs as if they were coming gently to life. The Leggies debate the way at every junction, but the choice they make is always the same one: straight on.
Umut keeps me in front, using me as some kind of shield though there is nothing ahead of us. We go along at this cautious pace for a long time, our elongated shadows warped against the curved walls. Our lamp light reflects back to us from the greasy surface layer that clings at our shins. At some stage we pass another tunnel and a hollow exhalation comes drifting out, as if something huge slept inside it. It is followed immediately by the slop of disturbed water.
Umut stops and thrusts his lamp into this new passage and peers in. The others pull up behind him. It is quiet now, except for the subdued ripple of the water, but then, as we listen, the sounds start again. Loud enough to be something heavy, man-sized.
“One of those renegades,” offers Ertughral, in a sharp whisper.
“Maybe,” says Umut. “Maybe not.”
He presses me on but slower now, glued to that noise, as if we had all merged into one consciousness, one single ear. We only get a few yards, I reckon, before new sounds come from up ahead. These are closer, something metal loosely attached and screeching against the concrete walls. We stop again.
The Leggies make noises that aren’t quite mutters: Tongue clicks, grunts, soft, quivering complaints. Reacting to the slightest sound.
“Umut,” says Ertughral from the back of the line, in a low voice.
“What?” Umut turns the lamp towards him and traces Ertughral’s glance down to his belt and the leather canister hanging there. It is shaking violently, jumping around on its loop. 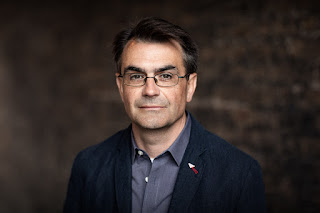 “Why did you bring - ,” Umut starts to say but Ertughral quiets him with a finger to his lips. With one hand he unlatches the canister and draws it carefully from the leather. The worm is fully out of the soil, pressed up against the glass, its black inner core writhing. It turns on its claws to follow the direction of the light and then stops, shivers and explodes.
The closest man leaps backwards.
The worm’s entire body has splattered against the glass with a violent crack, its worm shape all gone. Now a twitching bundle of fibres.
“Solujanlar,” says Ertughral. He nods in the direction of the side tunnel. “A brood.”
Nobody seems to know what to do. We are stalled in this darkness, crippled. All order and authority is gone. Umut yells but nobody listens. They are all saying, ‘Solujan, solujan.” Their word for worm. Each voice carries the germ of panic to the next. The mutterings gets louder, the voices more shrill. Pretty soon everybody is pushing me, using me as a kind of punch bag, while they debate how to handle the situation. Umut eventually loses patience, shoves them aside, takes a corner of my shirt and drags me along behind him, the others complaining, but following nevertheless.
“Come,” he says.
I try to shake him loose. He cuffs me across the back of my head. There is motion in the side tunnel, and then a loud splash. A man screams and his scream is violently cut off.
I can smell it, even in this stinking hole. The worm smell: dense and sweet. Just as Umut turns his lamp to the back again, more slowly and reluctantly this time, we all hear the noise, in the midst of the mayhem: the crack of dense glass against concrete. The tinkle of the broken shards.
Back at the junction of the tunnels, a single Leggie is twisting his torso in a silent struggle while two flabby arms tucked under his chin and shoulder, slide him out beyond the range of Umut’s lamp light into the dark. Ertughral is beached on a concrete ledge, his head bloody, his eyes open while he receives attention from another of these creatures, whose face seems to have melted, from the bridge of his nose down to his mouth, hanging in rivulets of flesh over its chin.
Erthughral’s hand is empty. The glass is smashed on the ledge beside him. The worm is gone.
Umut makes a low sound, like a muffled scream. The sweat all across his forehead sparkles under his lamp light. He directs the light to the broken glass tube and beside it a dark smear where the worm slid from the ledge.
“Aman tanrim,” mutters the Leggie nearest to Ertughral, who has the other lamp, now dropped to his side. A lump is rising through his trouser leg. He stands there quivering, holding his hands over his torso as if he wants to push the thing away but won’t dare touch it. Nobody moves or speaks. We all stand quiet and watch its progress, the lump easing upwards, pausing, moving again. A probing tongue reaches out from under his belt.  Another Leggie, standing just behind me, raises his gun to his shoulder.
Posted by Pewter Wolf at 10:18:00