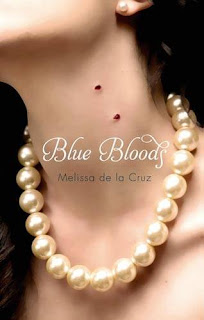 Stop me if you’ve heard this one before – they’re young, fabulous, good-looking and they rule over Manhattan. No, I’m not talking about Gossip Girl, I am talking about the new vampire series that has been bought to the UK by the same publisher that bought the Twilight Saga and the House of Night series to UK shore.

Blue Bloods by Melissa de la Cruz (the first book in the series of the same name) starts with us introducing to our characters and sets everything up for the next few books. We meet our main character, Schuyler Van Alen, and her friend, Oliver, as they try to get into a club (under fake IDs) where Schuyler swears she sees a man get run over by a taxi, only to rush over and find that he hadn’t. And to find that he’s Jack Force, one of the hottest guys in school. And not ever in the same sphere as her. Yet he knows her name!

But things begin to happen. Because soon, Schuyler discovers that she's a Blue Blood, a member of the city's glamorous and secret vampire elite. They're young, beautiful and powerful (not mentioned fanged - yes, they have fangs). But now they're being murdered - which is impossible but Blue Bloods can't die. Or so they thought. Now, Schuyler must find out who or what is behind it before she's next.

The start of a series and it sets everything up nicely (yes, this is a long game book series, like Harry Potter and House of Night) and stupidly easy to fall into. Maybe it's because I was actually in New York when I started this book (must thank the lovely Atom Book Twitter-Person for sending me a copy of this book! I owe you one!) so I could say I walked down that Avenue or was at Time Square.

But I fell into this book and enjoy myself while reading it. Sure, there was one or two things that some people might find annoying (the list of fashion labels might put some boys off) but I love Blue Bloods and I can't wait to start on the second book in the series, Masquerade!
Posted by Pewter Wolf at 20:47:00