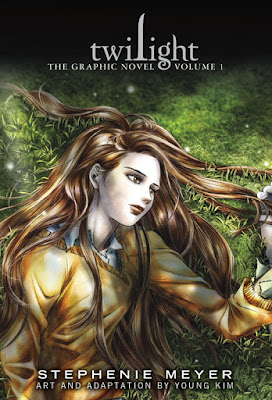 So, I might as well tell you about how it was adapted and what the art (both done both by Young Kim). The art in this volume is shockingly beautiful. Some people will see it as a bit Anima or Manga-ish, but I do like it! I like how the characters look (sorry, no Kristen Stewart/Robert Pattinson/Taylor Launter here!) because some, if not most, of the characters look like how they looked when I first read Twilight - WAY before the film rights were bought by Summit. The main characters that Young Kim drew that fitted what I had inside my head was Bella, Alice (that hair!) and Jacob.

Now, let's get into the adaptation. Before I go any further, I must stress that Stephenie Meyer didn't adapted the story – that was Young Kim's department. But Stephenie was HUGELY involved with both the art and the storyline. But there are a few times within the book's pages that I felt that the adaptation was cut in the wrong place or the change of some wording felt a little out of place. But it doesn't stop the flow of the story, but if you are a fan of the Twilight Saga, you might find it a bit jarring. But as this is a graphic novel, this helps speeds things along a bit.

Also, this a Twilight: Volume One of the Graphic Novel. The story is split into two volumes (US and UK Publishers haven't revealed if/when Volume 2 will be published) but this can be forgiven due to the amount of drawings within its covers.

And, if you expecting pages and pages of colour, think again. Colours are used sparingly and, because of this, it makes the pages when colour is used more important. For example, the first few pages (Showing Bella in Phoenix and then showing Bella in Forks) show the difference of worlds for Bella – warm oranges of Phoenix and the earthy greens of Forks. And when we see Edward in colour... Now that would be telling.

If you're a fan of the Twilight Saga, then you'll buy this. If you're curious to see what a graphic novel could look like (as over the course of the year, they will get more popular, me thinks), then there's no harm giving this a quick look. But if you are a die-hard Manga reader, then maybe this will annoy you with some of its style.

But I like it. And maybe I would like to see how Young Kim finishes Twilight in Volume Two... And we can guess that there will be a Volume Two (“Why,” I hear you ask? Look at the cover and notice where her arm goes, it's on something that looks like a man's hand... Will Volume Two be a continuation of this scene? I think so...)
Posted by Pewter Wolf at 18:07:00