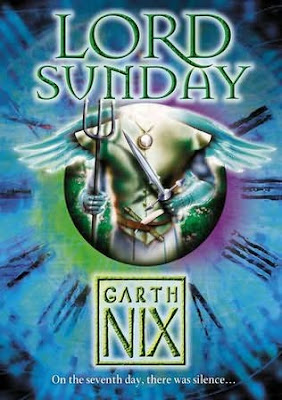 Okay, I know that I have been going on about this book for a while now (sorry to you and to my poor friends who I have annoyed over the past few weeks!). It was only because I wanted this book before I went away on my lovely holiday, because the book was going on general sale the day after I went away!

But I got it the day before at the airport (woo hoo!) and I read it in three days flat. But, I fear, I might have skimmed the story and missed one or two things so SORRY in advance.

So, LORD SUNDAY is the final book in the Keys to the Kingdom series and, because some of you lot might not have read the series (or have a clue what I'm going on about), I'll be vague!

After the events that happened in SUPERIOR SATURDAY, which made him fall out the Incomparable Gardens, Arthurs lands not in the Upper House but somewhere completely unexpected. Arthur has to find the Seventh (and final) piece of the Will and claim the Seventh Key from the last Morrow Day, Lord Sunday.

But things aren't going to be easy. Saturday, without her Key, has joined forces with the mysterious Architect's son, the Piper. Arthur is desperately trying to hold onto his mortality and a tide of Nothing is rising, destroying everything in its path, slowly destroying the House. And if the House is destroyed, then so is the Universe.

Now, I'm going to be honest: I have no idea what I was expecting from this book. I think all throughout the series has been slowly building to an action-packed showdown and when we did see action, Arthur isn't involved in it! Suzy Blue is and so is Leaf (we see a lot more of her in this book!) but no Arthur.

Also with Arthur, he's no longer relateable. In the start of the series, he was a regular kid thrown into a strange and twisted world. But, because of the events and revelations that happened within the series, this is part of the over-arcing plot.

But, I really like this series and this book might not be my favourite (that would go to Sir Thursday!), but I think this fits the series. But some readers might feel like they were a bit short-changed.

Now, I hope that this ending doesn't creep up in the two novels Garth Nix is writing to the Old Kingdom series (aka the Abhorsen series if you live outside the UK) or there will be trouble...