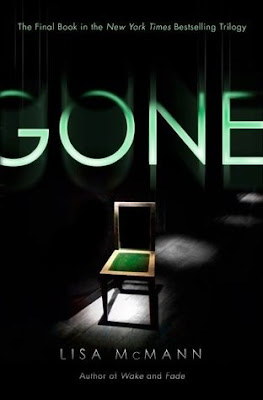 I have to be honest: This book was meant to be my holiday read. But, I read the back once I got it in the post and after than... I couldn't stop myself! I HAD to read it!

After the shocking event of FADE, Janie is stuck in the middle of a horrible situation. A situation that not even her beloved Cabel can solve.

But Janie's world is turned upside-down by a mysterious man and she mas to make a decision, both as bad as the other.

What will Janie choose? And once she chose it, will she stick to it?

Out of the trilogy, GONE is the most human and while I know there will be some readers will find it a bit of a let down, I liked it. I didn't love it, but it gave the trilogy a satisfying ending. Now, I'm not going to tell you if it all ends happily ever after or not, but Lisa McMann stays true to her characters and, for that, I thank her because I loved spending time with Janie, Cabel and the Captain.

Now, I know the trilogy had ended, but if Lisa McMann writes another book linked to the trilogy (maybe from Cabel's Point of View) or a new story, I will be happily waiting to get my hands on it when released in the UK. If not, thank you Internet!
Posted by Pewter Wolf at 13:38:00